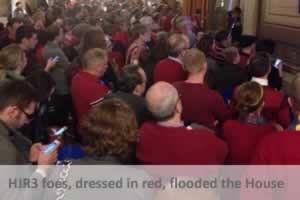 Indianapolis, IN - The Indiana House on Tuesday approved a proposal which seeks to put a gay marriage ban in the Indiana Constitution.

After roughly an hour of debate, House members approved House Joint Resolution 3 (HJR-3) with a 57-40 vote.

But even if the Senate follows the House's lead, voters will not vote on the measure this year as previously expected.

That's because HJR-3's language was altered in the House. An amendment approved on Monday carves out banning civil unions and other similar arrangements. That alteration means that the measure cannot advance to the ballot box until after the next General Assembly gives its approval.

"While we are disappointed that this harmful amendment cleared the House, we certainly are not deterred," Freedom Indiana, the coalition working to derail HJR-3, said in an emailed statement. "We took a huge step forward yesterday as members of the House voted overwhelmingly to strike down the dangerous second sentence of HJR-3 – meaning we are still closer than ever to keeping this amendment off the ballot this year."

Editor's Note: Chicago-based Equality Illinois will hold a phone bank on Thursday, Jan. 30 to help Indiana defeat the constitutional amendment against gay marriage. The phone bank will be held from 5 to 8 p.m. at the Equality Illinois, 17 N. State St., Suite 1020. For more information or to reserve a spot email info@eqil.org.