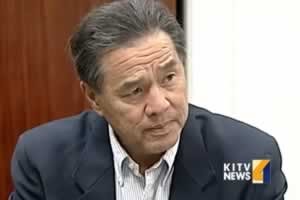 Honolulu, HI - Senator Clayton Hee, chair of the Hawaii Senate Judiciary and Labor Committee, told reporters on Saturday that he expects the Senate will give final approval to a gay marriage bill on Tuesday.

Hee, a Democrat, announced that he would recommend passage of the bill as amended in a House committee and approved Friday by the full House.

The Senate approved the marriage bill last week. But a return trip is necessary for senators to consider amendments approved during the House committee phase.

"Although Hawaii was not the first to enact same-sex marriage, what shouldn't be lost is Hawaii was the first – in the Baehr v. Lewin lawsuit – that started the same-sex marriage discussion nationally," he said, a reference to the landmark 1993 Supreme Court case that struck down the state's law limiting marriage to heterosexual couples. Five years later, voters responded by approving a constitutional amendment which gives lawmakers "the power to reserve marriage to opposite-sex couples."

Hee predicted a 21-4 vote in the Senate, with three Democrats voting against the measure.

Democratic Governor Neil Abercrombie applauded Friday's passage in the House and has pledged his signature.

State Rep. Bob McDermott, a Republican, announced Friday that he plans to ask a court to block the law's start. McDermott argues that the 1998 amendment gives lawmakers the power to only define marriage as a heterosexual union.