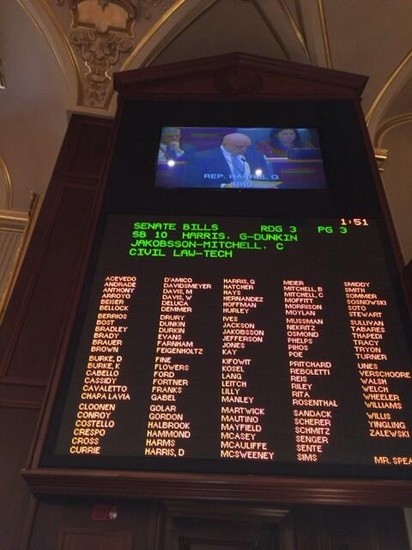 photo credit // twitter/debmell
Springfield, IL - As Illinois lawmakers return to the Capitol for the final week of the fall veto session, a stalled marriage bill is currently up for debate in the Illinois House.

Senate Bill 10, the Religious Freedom and Marriage Fairness Act cleared the Illinois Senate on February 14, but stalled in the House on May 31 when its chief sponsor, state Rep. Greg Harris (D-Chicago), announced that he would not be calling the measure.

Harris addressed House members Tuesday on the floor before the bill is to be called for a vote.

"It looks like today is the day," Anthony Martinez, executive director of The Civil Rights Agenda, told ChicagoPride.com.

Harris filed two amendments to SB 10 on Tuesday. The 2nd amendment changes the effective date to June 1, 2014, which means the measure would now only need 60 votes to pass in the House, but would require the Senate's re-approval.

Watch live video from the floor of the Illinois House.