Go Purple for Spirit Day and take a stand against bullying 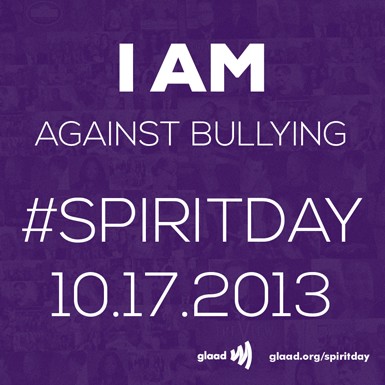 photo credit // glaad.org/spiritday
Millions of people today are "going purple" for Spirit Day, an annual day in October when Americans wear purple to speak out against bullying and to show their support for lesbian, gay, bisexual, transgender and questioning (LGBTQ) youth.

The idea for Spirit Day came in 2010, from teenager Brittany McMillan, who wanted to remember those young people who lost their lives to suicide and to take a stand against bullying.

"Going purple" involves wearing purple, as well as turning logos and other social media badges purple to stand against bullying.

"As our country moves closer to full legal equality for lesbian, gay, bisexual and transgender people, LGBT youth continue to face staggering rates of bullying at school," GLAAD spokesman Wilson Cruz said. "Spirit Day is an opportunity for all of us to send a message of support to LGBT youth everywhere and for those young people to hold their heads high while our nation stands behind them."

Viewers of "Access Hollywood," "CNBC," "Extra, Jimmy Kimmel Live," "MSNBC," "Telemundo," "The Talk," "The View," "Watch What Happens Live," the "Wendy Williams Show" and more will notice a lot of purple in the hosts' clothing. In Chicago, the anchors of "NBC 5 Today" participated by "going purple."

Landmarks that will be colored purple include Las Vegas' Fremont Street Experience, the LAX pylon lights, the New York Stock Exchange and Times Square, as well as billboards at American Eagle Outfitters, MTV, NASDAQ, and the Thomson Reuters building.

To celebrate the day, Chicago-native and out country singer Steve Grand will play a free concert at Las Vegas' Fremont Street Experience.

Visit www.glaad.org/spiritday for more information and spread the word by using hashtag #SpiritDay and @glaad and @gopride on Twitter.