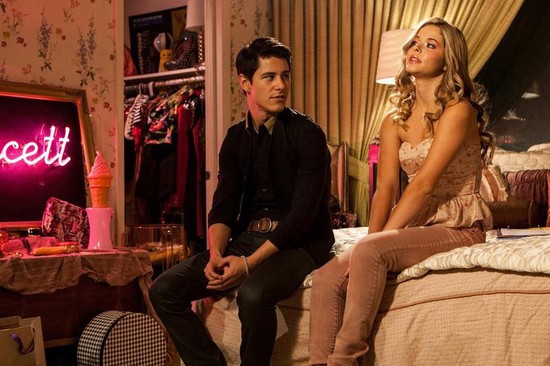 Chicago, IL - Reeling, the second longest-running LGBT film festival in the world and a Chicago cultural institution for over 30 years is back with another slate of movies that showcase not only diversity within the queer community but also diversity in the range of possibilities within film itself. From the sweet and sassy opening night comedy G.B.F. to the historical sweep of the biographical epic LUDWIG II, the 31st edition of Reeling has something to satisfy every cinephile. Scheduled to take place from November 7 - 14, this year's Reeling fest will entertain, inspired, amuse, and break a few hearts along the way. A bevy of special guests and satellite screenings are also part of the line-up.

Reeling returns to the Music Box Theatre (3733 N. Southport Ave.) for its opening night presentation on Thursday, November 7 and then moves on to its main venue, The Logan Theatre (2646 N. Milwaukee Ave.) from November 8 to 14. The fest's home base Chicago Filmmakers (5243 N. Clark St.) will also host screenings. Satellite screenings will take place at the Block Cinema at the Mary & Leigh Block Museum of Art (40 Arts Circle Drive, on the campus of Northwestern University in Evanston), the DuSable Museum of African American History (740 E. 56th Place), Sidetrack (3349 N. Halsted St.), and the Edgewater Branch of the Chicago Public Library (1210 W. Elmdale Ave.).

The 7:30 p.m. screening of this delightfully fizzy concoction will be followed by a reception where more laughs abound at the nearby Laugh Factory (3175 N. Broadway). There, the fun continues with hilarious performances by local LGBT comics.

Reeling closes on Thursday, November 14 with three closing night selections - a gay, lesbian and transgender film - LUDWIG II, REACHING FOR THE MOON and IAN HARVIE SUPERHERO. LUDWIG II is the story of "Mad King Ludwig," the gay 19th century Bavarian monarch known mostly for his lavish fairytale castles and his solitary nature, who has been elevated to almost mythical status. In this lushly art-directed biopic, co-directors Peter Sehr and Marie Noëlle give the life of King Ludwig II an epic treatment while also managing to understand the emotions that drove him. Phenomenal newcomer Sabin Tambrea plays the young Ludwig II with an incomparable breadth of emotions in this expansive narrative of breathtaking grandeur that was shot on the actual locations including the lavish fairytale castles that remain a hallmark of Ludwig II's all too brief reign.

REACHING FOR THE MOON is a sumptuous English-language 1950s period piece that recounts the star crossed love affair of Pulitzer Prize winning poet Elizabeth Bishop (played by an elegantly graceful Miranda Otto of The Lord of the Rings trilogy) and the Brazilian architect Lota de Macedo (an earthy, sensual Gloria Pires) when she left America to live and write in Rio de Janeiro. Winner of the "Audience Award for Best Feature" at Outfest,Queerty.com has dubbed Reaching for the Moon, "One of the biggest lesbian films of the year."

In his debut comedy concert film, directed by Liam Kyle Sullivan, Ian Harvie, the world's first FTM transgender stand-up comedian, takes a sex positive look at his transition from his own unique perspective. Taped before a live audience, the laugh a minute IAN HARVIE SUPERHERO was produced by one of Ian's biggest fans - Margaret Cho. "It was my great honor to produce this special," Cho has commented, "It's an incredible work and I am so proud to share this with the world."

A Closing Night Reception will be held at the Stan Mansion (2408 N. Kedzie Ave.) which is only blocks from The Logan Theatre. Details on the reception are forthcoming.

Other highlights of the festival include the Midwest premiere of BLACK BOX, writer-director Stephen Cone's acclaimed follow-up to The Wise Kids, Rodney Evans' long anticipated new feature THE HAPPY SAD, Cory Krueckeberg's steamy GETTING GO: THE GO DOC PROJECT, Drew Denny's acclaimed debut road dramedy THE MOST FUN I'VE EVER HAD WITH MY PANTS ON, Jane Clark's METH HEAD, Chicago based director C.M. Birkmeier's romantic gay mumblecore IN BLOOM, Spanish director Marçal Forés' wildly inventive variation on Donnie Darko ANIMALS, STRANGER BY THE LAKE, director Alain Guiraudie's erotic thriller, winner of the Queer Palm d'Or, Anna Margarita Albelo's hilarious black comedy, WHO'S AFRAID OF VAGINA WOLF?, and INTERIOR. LEATHER BAR., the much buzzed about collaboration between James Franco and Travis Mathews that ruminates on the missing footage from director William Friedkin's Cruising. The controversial 60-minute film has been the talk of the film festival circuit for the past year and Reeling is excited to bring it to Chicago for its debut. DMW Greer's BURNING BLUE, based on his acclaimed play about closeted Navy pilots set in the period of "Don't Ask, Don't Tell," stars actor and model Trent Ford (The Vampire Diaries), Morgan Spector (Boardwalk Empire, Orange Is the New Black), and Rob Mayes (The Client List, 90210), who will be on hand for the screening.

Documentaries, as always, are part of the exciting Reeling line-up. This year's Documentary Centerpiece is I AM DIVINE, in which director Jeffrey Schwarz offers a definitive biographical portrait that encompasses the legendary underground superstar's rise to infamy and delves into the emotional complexities of its subject. Other documentary highlights include BATTLE OF AMFAR from Oscar winning directors Rob Epstein and Jeffrey Friedman, Jim Tushinski's I ALWAYS SAID YES: THE MANY LIVES OF WAKEFIELD POOLE, Heather Winters' TWO: THE STORY OF ROMAN & NYRO, Micah Fink's THE ABOMINABLE CRIME which exposes the violence that gays and lesbians are subjected to on a daily basis in Jamaica, and ONE ZERO ONE, Tim Lienhard's visually dazzling portrait of the Leigh Bowery-like drag artist Cybersissy and his diminutive companion BayBjane, the self-described "smallest drag queen in the world."

Whoopi Goldberg's documentary debut I GOT SOMETHIN' TO TELL YOU about her comic mentor Moms Mabley, will screen at The DuSable Museum of African American History.Reeling's presentation will include a specially taped message from Whoopi Goldberg.

Grammy award winning singer-songwriter Matt Alber will be on hand for a screening of musical shorts highlighted by MATT ALBER WITH STRINGS ATTACHED after which he will perform for the Reeling audience.