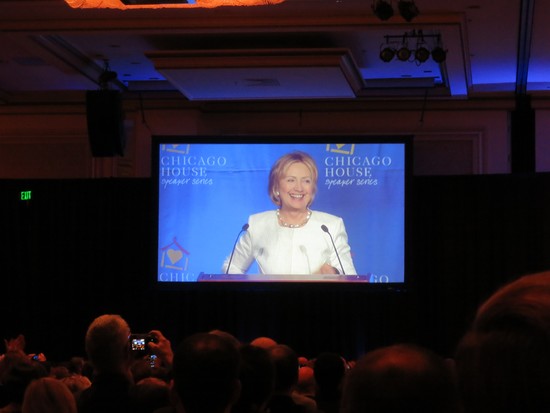 "We all have our own obligation to find ways to serve," Clinton told the crowd of nearly 2,000 people gathered in the Chicago Hilton's beautiful International Ballroom.

A native of Illinois, Clinton served as the 67th U.S. Secretary of State from 2009 to 2013, serving under President Barack Obama. She was previously a U.S. Sen. for New York and a leading candidate for the Democratic presidential nomination in 2008.

Clinton honored Chicago House, which provides permanent, community-based housing, support services, and prevention outreach to individuals and families struggling with HIV and AIDS. She called the agency a "source of hope."

"There's still so much that needs to be done," Clinton added.

The Annual Speaker Series, which originated from a desire to raise awareness and education around the key issues of HIV/AIDS and homelessness, has featured great minds in philanthropy, business, entertainment and politics, including former Secretary of State Madeleine Albright, award-winning actor Whoopi Goldberg and designer Kenneth Cole.

In its inaugural year in 2009, the organization welcomed President Bill Clinton to kick off what has now become its largest and most impactful annual fundraising event.

On Wednesday, Clinton joked that the crowd was bigger than the turnout for her husband, who drew about 950 guests.

After her speech, Viggiano conducted a 30 minute Q & A with Clinton in front of the audience, where they discussed a numbers of topics including the Affordable Care Act, Syria and gun violence in Chicago.

About halfway through the Q&A, Viggiano said it was "time to deal with the elephant in the room." He read a question from a young Chicago House resident, Gayla, age 6. She wrote, "I would vote for you as President of the United States. Are you going to run?"

Before Clinton could answer, the enthusiastic crowd responded with a standing ovation. After the applause quieted down, Clinton thanked the audience and said she was enjoying her time as a citizen and didn't feel a rush to think about the future.

"It's time to support the president," Clinton commented.

She did promise to call Gayla.

Viggiano ended the interview with "5 frivolous questions," including "have you ever taken a selfie?" Clinton laughed and then offered to take one with her gracious host. (See the "selfie" photo above.)

The sold out event raised over $800,000 for Chicago House and was their most successful fundraiser to date. According to Chicago House CEO, Rev. Stan Sloan, the Speakers Series has raised nearly two million dollars to date.