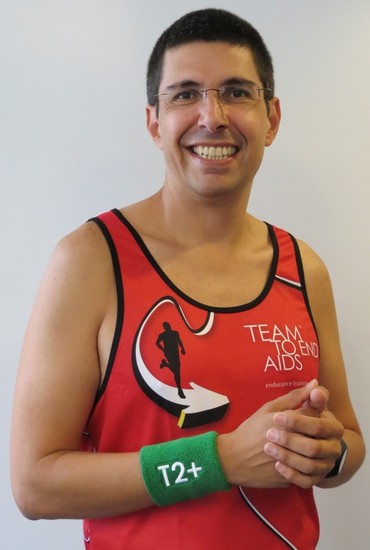 My running look used to be complete with sunglasses, shorts, and a TEAM TO END AIDS (T2) singlet—the mark of a training program that fights HIV/AIDS with endurance sports. This year, however, I've expanded my wardrobe.

I now don a lime-green wristband that reads, "T2+," wearing my HIV status on my sleeve, literally. I'm not alone either. Many of my teammates who are also HIV positive wear a T2+ wristband.

It's subtle and most people who see it won't understand the reference, but for me it speaks volumes: Instead of dying from HIV/AIDS, I'm living with it—and living quite well.

Running has been my constant companion, even before my HIV diagnosis in 1994. Back then, my typical run was shorter as my impatience was greater. My exercise routines mimicked the contours of my life. Desperate to seize every fleeting moment, I favored short sprints over long, meandering runs. My attentions raced to make the most of a young, abbreviated life.

It's hard to remember what it was like to run, or even live, without HIV. I'll never know what difference HIV made in my athletic abilities, recoveries, or injuries; but the changes in my running after antiretroviral therapy were dramatic.

I feared drugs for years because they represented an illness I struggled to accept, delaying my therapy. To swallow a daily reminder of HIV seemed, back then, too much to bear. I expected disappointments, scary side effects, drug resistance. In 1996, scientists lauded multi-drug combination therapy as a major breakthrough, but I remained suspect. I braced for more bad news; I had been let down before.

Getting into a pool meant a sinus infection would surely follow. And running in intrepid weather, rain or cool temperatures was completely out of the question.

By 2004, facing a depleted immune system and sapped energy, I relented. Despite some initial side effects, I adjusted well to therapy. My viral load immediately declined to undetectable levels and my immune-system counts reversed their characteristic decline.

But most remarkably, I became healthier, stronger, more alert, more alive. Before therapy, catching a cold was a monthly occurrence. And colds readily cycled into fever-filled bronchitis or worse.

With therapy, my world changed. I ran my first of many marathons at age 35. I rediscovered running in the leaves of fall and in the deep freeze of winter. Not only did I conquer the pool, I trained for a triathlon in Lake Michigan!

Today, I face the challenges of most 43-year-old marathoners: less flexibility, less resiliency. I sweat excessively and battle frequent cramps, and recovering from long runs is an intentional process. But I love the sport as much as ever and believe that that's what this green wristband is all about: It reminds me that living with HIV/AIDS takes dedication and perseverance, toughness and sweat.

David Ernesto Munar is President/CEO of the AIDS Foundation of Chicago (AFC) and a 12-time marathon runner.