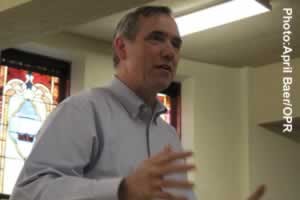 Washington, DC - Oregon Senator Jeff Merkley, a Democrat, plans to introduce a resolution calling on the International Olympic Committee (IOC) to condemn an anti-gay law recently approved in Russia ahead of the Winter Olympics to be held in Sochi early next year.

Russian President Vladimir Putin in June signed a law that prohibits the public promotion of gay rights. The nation's "gay propaganda" law prohibits the positive portrayal of gay men and lesbians in a venue where minors might be present, effectively outlawing everything from Gay Pride marches to the simple act of wearing a rainbow pride pin in public.

Despite assurances from IOC officials that the law would not be in effect during the Winter Olympics, two Russian officials this past week said that it would.

According to BuzzFeed.com, Merkley will introduce the resolution when the Senate returns from its August recess.

"With increasing attention being paid to Russian's deplorable treatment of LGBT people, we applaud Senator Merkley and efforts in Congress to shine a spotlight on this issue and the cloud that hangs over the Sochi Olympic Games," Human Rights Campaign spokesman Michael Cole-Schwartz said.