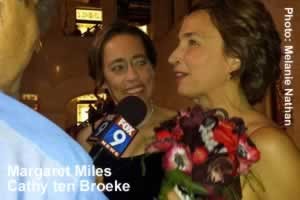 The Miles-Broeke wedding kicked off a marathon wedding session of 42 same-sex couples in the Minneapolis City Hall rotunda. Mayor R.T. Rybak, an ordained Universal Life Church minister, plans to marry all the couples in an event expected to last the entire night.

Reid Bordson and Paul Nolle, who met 13 years ago and are the proud parents of 1-year-old Anna Bordson-Nolle, were among the 11 couples marrying at Como Park in St. Paul.

"This is doubling the number of weddings that we've done in a 24-hour cycle," Michelle Furrer, campus manager at the park, told the Pioneer Press. "It's great to see that people are taking advantage of the opportunity."

A couple who got engaged at the Mall of America also were among those tying the knot on Thursday morning. Holli Bartelt and Amy Petrich married at the mall's Chapel of Love.

Following the defeat of an effort last year to limit marriage to heterosexual couples with a constitutional amendment, lawmakers this year legalized same sex marriage.

"To think that within a year it turned around and it actually didn't get banned but became legal," Bordson said. "This past year has been awesome for same-sex couples."