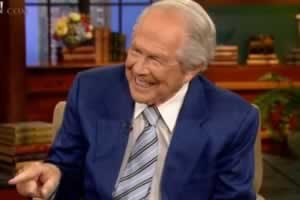 A 700 Club viewer asked: "When we 'like' things on Facebook, if it's something that goes against what is written in the Bible – such as pictures of same sex couples – is that considered condoning that behavior? How do you explain this to new Christians or youth?"

"What you're saying is 'Yes, I like this kind of thing.' You got a couple of same-sex guys kissing, you like that, well that makes me want to throw up," Robertson said.

"To me, I would punch vomit, not like," he added with a chuckle. "They don't give you that option on Facebook."

Earlier in the broadcast, Robertson warned gay men and lesbians that the land will "vomit you out."