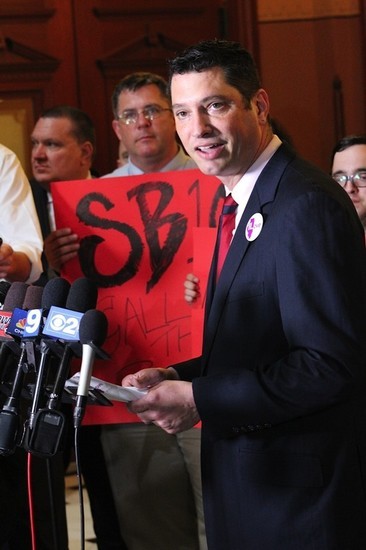 photo credit // chicagopride.com
Chicago, IL - Today Illinois Unites for Marriage, the coalition working in support of The Religious Freedom and Marriage Fairness Act, outlined the next steps to continue the work towards winning the freedom to marry in Illinois. A search for a campaign manager, an expanded field team and a restructured coalition are included in the plan to proceed after the Illinois House of Representatives failed to act on marriage for same-sex couples.

"Committed, loving couples and families in Illinois are still waiting for the dignity and respect of marriage, and that's who we are working for. The frustration and disappointment felt across the state when the marriage bill was not called for a vote has been channeled into refocused work and dedication at Illinois Unites to win the freedom to marry," said Jim Bennett, a chair of the Illinois Unites coalition. "Not only is marriage for same-sex couples coming to Illinois, it will arrive with a strong bedrock of LGBT and allied organizations ready to support all those who wish to marry the person they love."

Illinois Unites is hiring a full-time campaign manager that will oversee and coordinate the statewide advocacy campaign, including grassroots/field work, communications/media, lobbying and coalition outreach. Illinois Unites will be expanding its field operation, with a focus on increasing its door-to-door strategy in targeted districts, expanding its phone bank call lists, and setting up walking stops near public transit hubs. Illinois Unites will also be recruiting volunteers and gathering additional input from supporters during nine community meetings in various parts of the state by mid July.

Illinois Unites has also reconfigured its structure to include more coalition partners at weekly strategy meetings, forming working groups each dedicated to refining strategies in lobbying, ground work, and communications. Active coalition partners still include Lambda Legal, the ACLU of Illinois and Equality Illinois, and have expanded to include more direct participation from local and national social justice organizations including Citizen Action Illinois, The Human Rights Campaign, the Chicago Urban League, Freedom to Marry, and The Civil Rights Agenda. A complete list of coalition partners is available at www.illinoisunites.org/about, and other organizations are invited to participate.

The Religious Freedom and Marriage Fairness Act, having passed in the Illinois Senate in February, has been extended to August 31, 2013, with possible further extension into the veto session in late October and early November. The Governor's call for a special session next week limits the legislature to acting only on the state's pension issues.