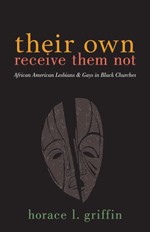 A new book is stirring controversy for its arguement that pervasive homophobia in the historically black church has reached "crisis" proportion.

"The black church's teaching that homosexuality is immoral has created a crisis for lesbian and gay Christians in black churches," the Rev. Horace L. Griffin, an Episcopal priest, writes in the preface of his new book, "Their Own Receive Them Not: African American Lesbian and Gays in Black Churches."

"This black-church-sanctioned homophobia produces a lot of twisted black people," he writes. Griffin, who is black and gay, grew up in a Missionary Baptist church. Based on his life and church experience, he has witnessed how "black church leaders and congregants have been resistant and even closed in treating gay and heterosexual congregants equally or, in many cases, of simply offering compassion to gay people."

In his 240-page hardcover book, he now attempts to deconstruct the history and legacy of homophobia in the black church using a sociological, theological and biblical lens.

Comparing the plight of black gays and lesbians to "a game of Russian roulette," where the children of the church are no longer welcomed by the church, black lesbian and gay Christians find themselves in "no-win situations," he says. The end result robs them of "their soul, if not their integrity, family and lives."

Griffin, who teaches pastoral theology and directs field education at The General Theological Seminary of the Episcopal Church in New York City, says black church leaders use the Bible to oppress gays and lesbians in a similar fashion to the approach once used by white church leaders to oppress blacks during slavery and segregation.

The black church's "sexual secrets," says Griffin, have led to tragic outcomes, including a quiet complicity with the HIV/AIDS epidemic. "Even after two decades of AIDS research ... African American ministers, for the most part, display almost no change in their attitudes that AIDS is God's retribution on the 'sinful,'" he writes.

Griffin also believes the church's "secrets" have led to less- than-honest sexual practices among its members.

"Until black church leaders adopt different Christian approaches, 'Down Low' practices will continue," Griffin writes in reference to closeted, sexual activities of some black men with other men.

The book is now available at shop.chicagopride.com