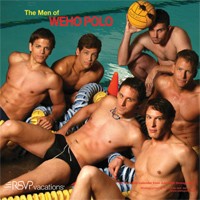 West Hollywood - Out of the water and onto the pages of their very own calendar, members of the West Hollywood Water Polo team are releasing the 'Men of WEHO POLO' 18 month pin-up calendar. The project was put together as a team fundraiser for the upcoming Gay Games in Chicago this July. The calendar combines sexy and athletic images of the world's premiere BGLTQ water polo team. This program boasts an impressive gold medal count as the defending champs from the Sydney and New York Gay Games.

Preview several photos from the 'Men of WEHO POLO' calendar.

Based out of West Hollywood, California the men who make up 'WEHO POLO' are comprised of members from the masters water polo and swimming program. Creating an interesting and successful dichotomy can be contributed to the family like aspects of the WEHO Waterpolo team. Men, Women, Gay and Straight alike are what help to make this program the success that is has been, racking up numerous IGLA and Gay Games gold medals for these post collegiate athletes. New and experienced players, young and older make up what you see in these pages, which guarantees a little something for everyone. Enjoy each month throughout the year with someone you know, or would like to know!

You can order your copy of 'Men of WEHO POLO' online at www.wehopolo.com

Preview several photos from the 'Men of WEHO POLO' calendar.