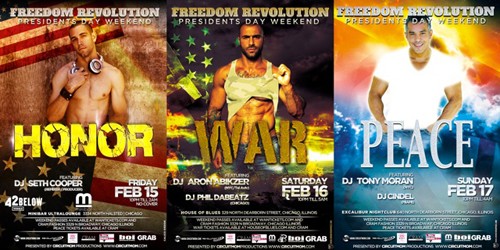 FREEDOM REVOLUTION: HONOR, WAR & PEACE debuts over the President's Day holiday, February 15-17, 2013, bringing world class DJ's and award winning productions to the Chicago, featuring the Chicago debuts of Remixer/Producer DJ Seth Cooper, International super DJ Aron Abikzer and Miami-based DJ Cindel Coss. DJ Phil DaBeatz and world-wide phenomenon DJ Tony Moran round out the lineup of amazing talents to finish off this amazing weekend of parties. Following the success of the sold out 2012 REVOLUTION parties for IML, Market Days and Halloween, this February heats up with not one, but four events destined to become yearly tradition.

Friday, February 15, 2013 – Minibar hosts "HONOR" (9p-2a) FREE!
Enjoying success with his wildly popular remixes and mash-ups, sexy DJ/Producer Seth Cooper makes his debut appearance with Circuit MOM for a kick-off party like no other being hosted at Chicago's swanky lounge, Minibar. Start your party weekend off right with a night of original beats, great drinks and a chance to win tickets to both WAR and PEACE. No cover charge and winners must be present to win.

Saturday, February 16, 2013 - House of Blues hosts "WAR" (10p-5a)
CircuitMOM Productions, Inc. is excited to bring Chicago the sizzling sounds of acclaimed Israeli producer/remixer DJ Aron Abikzer. Named by OUT Magazine as a "Top 10 DJ's You Should Know" for 2012, his meteoric rise to DJ royalty has taken him around the globe and featured him at the White Party Miami this past November. Aron is headlining Alegria NYC this month and MasterBEAT LA later this spring. His remixes, podcasts and SoundCloud feeds are some of the best tribal, vocal and house beats on the planet. He is paired with another one of OUT Magazine's "Top 10 DJ's You Should Know", Chicago's very own tribal master, DJ Phil DaBeatz who's packed dance floors thrive on every beat of his bass and drums style. This will be a Saturday night like no other.

Sunday, February 17, 2013 – Excalibur hosts "PEACE" (10p-4a)
The completely remodeled Excalibur will make its phenomenal debut to the gay community with "PEACE" featuring the iconic beats, vocals, remixes and dark sounds of legendary Grammy-nominated DJ Tony Moran. Having not only written for and produced virtually every major recording artist in the world, Tony has also spun his masterful DJ sets to sold-out audiences from Tai Pei to Toronto. His long awaited return to Chicago is the perfect time to unveil the redesigned, state-of-the-art sound, lighting and space at Excalibur guaranteed to blow your mind. In our continuing quest to introduce new talent to Chicago, we present another amazing debut for FREEDOM REVOLUTION in DJ Cindel Coss. Raised on house music in Chicago but also drawing on his Puerto Rican roots, this young, Miami-based DJ/producer is quickly becoming known as "The King Of Drums." Citing influences from Danny Tenaglia, Chus & Ceballos and Ralphi Rosario, DJ Cindel has become masterful in his mix of drums and house vocals. DJ Cindel can go from pool party to afterhours with his sets and is the perfect match for Tony Moran to bring Sunday nights' event to a climactic end to the weekend.