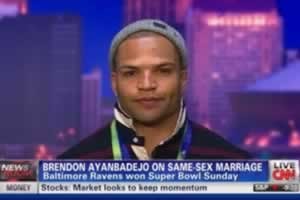 Baltimore Ravens linebacker Brendon Ayanbadejo has signaled that he's prepared to back a transgender protections bill in Maryland.

The 36-year-old Ayanbadejo vocally supported passage of a gay marriage law last year. A measure which would expand critical workplace protections based on gender identity is currently before the Maryland General Assembly.

When asked his thoughts on comparing marriage equality to the civil rights movement, Ayanbadejo said people are born gay, and went on to suggest support for the proposed law.

"I've had plenty of conversations with people that are gay and they say they are born gay, no different than me being born this beautiful almond coconut color that I am. People are born gay. So why treat them any differently? It's time that we treat everybody fairly. And not only are we trying to dictate who people should love, we're also trying to dictate who people should be."

(Watch the entire segment on CNN)