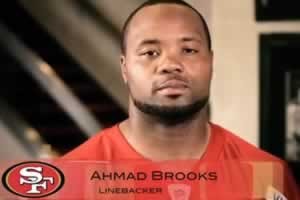 San Francisco, CA - Two San Francisco 49ers players have denied that they appeared in an It Gets Better video.

Speaking to USA Today, linebacker Ahmad Brooks and defensive tackle Isaac Sopoaga insisted they never made the video when asked about their support for gay rights in connection to teammate Chris Culliver's recent anti-gay remarks.

In the video, safety Donte Whitner says, "The San Francisco 49ers are proud to join ItGetsBetter.org, to let all LGBT teens know that it gets better."

When shown the video, Brooks responded: "Oh, that. It was an anti-bullying video, not a gay [rights] video."

Sopoaga also denied making the video, and refused to comment on it when reminded.

On Thursday, Dan Savage, a co-founder of It Gets Better, tweeted, along with the hashtag #horseshit, that the video had been removed from ItGetsBetter.org.