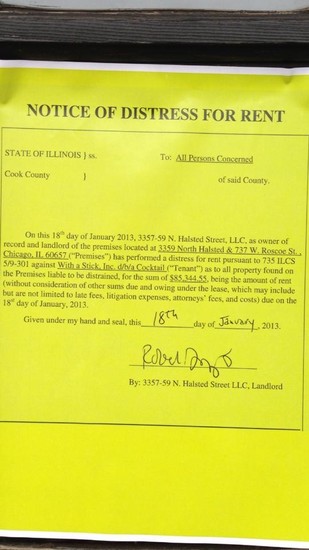 Chicago, IL - Cocktail, a once popular gay bar in Chicago's Boystown neighborhood at the southeast corner of Roscoe and Halsted, has received an apparent death blow as the owner and landlord of the building, 3357-59 N. Halsted Street, LLC, today seized all property on the premises. With the seizure of the assets, presumably fixtures, equipment and inventory, the club will not be able to operate.

According to witnesses, signs were put up this morning by the landlord and movers with a large truck removed everything in the bar.

Cocktail, under its corporate name With a Stick, Inc., had filed for Chapter 11 protection in U.S. Bankruptcy Court on August 12, 2012. However, the owner and operator of Cocktail, John "Geno" Zaharakis, failed to comply with orders of the bankruptcy court and the case, along with its protections, was dismissed on January 8, 2013. The dismissal allowed the owner of the building to legally proceed with asset seizure in an attempt to collect and alleged $85,344.55 in rents.

Cocktail and Zaharakis have been embroiled in financial problems and subsequent litigation since March of 2011. The lawsuits allege tens of thousands of dollars in delinquent rents, monies owed to former employees and other defaulted payments.

Cocktail has been closed two different times in the last year due to temporary license revocations related to unpaid taxes. It most recently re-opened February 10, 2012.