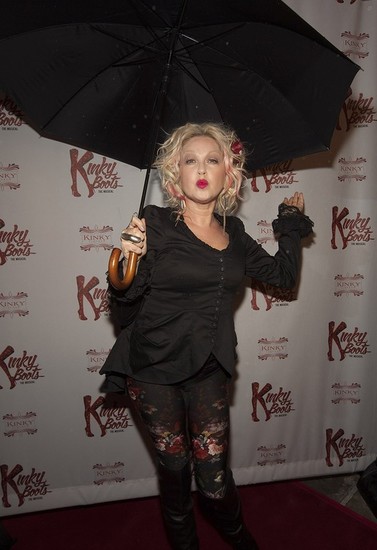 cyndi lauper on the red carpet

The show is currently playing at the Bank of America Theater in Chicago for a four-week run before it heads to New York in March for The Broadway opening. The musical is based on the book written by Harvey Fierstein with music and lyrics by Cyndi Lauper.

The events of the evening began with a VIP reception presented by KINKY® Liqueur, a premium fused-vodka and official drink of Kinky Boots, that was held in the theater's luxury suite where Grammy-award winning Lauper took a moment to attend prior to the show.

Immediately following a stellar performance by the cast (read the complete review of the musical from ChicagoPride.com entertainment editor Michael Roberts), the party moved to Boystown where Sidetrack hosted the musical's cast and creative team.


Cyndi Lauper at Sidetrack on the red carpet, ©ChicagoPride.com

The post party filled three large areas of the bar where Lauper, Fierstein and the cast posed for more red carpet photos.

About Kinky Liqueur
KINKY® Liqueur, owned by Crosby Lake Spirits Company in St. Paul, Minnesota, is a fusion of super premium vodka and a playful combination of fruits. KINKY® Liqueur debuted its pink cocktail in June 2011.

About Kinky Boots, LLC
From four-time Tony Award-winner Harvey Fierstein and Grammy Award-winning pop icon Cyndi Lauper and comes the exhilarating new musical Kinky Boots, directed and choreographed by Tony Award-winner Jerry Mitchell. Charlie Price has suddenly inherited his father's shoe factory, which has been in his family for generations but is on the verge of bankruptcy. In trying to save the business, Charlie finds inspiration in the form of Lola, a fabulous entertainer in need of some sturdy stilettos. Kinky Boots begins its pre-Broadway engagement at Chicago's Bank of America Theatre in October 2012. Previews begin on Broadway at the Al Hirschfeld Theatre in New York on March 5, 2013 in advance of an April 4, 2013 opening. For tickets and more information, visit http://www.kinkybootsthemusical.com