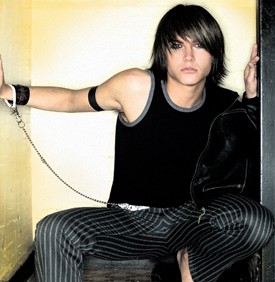 This year, ChicagoPride.com is excited to welcome Crystal Lake native Jim Verraros, best known for his appearance on season one of American Idol. Verraros has since broken away from the Idol stereotype with the release of his debut “Rollercoaster.”

The 22-year-old continues on a path to success as both an actor and singer. Verraros starred in the hit indie-flick Eating Out, in which he contributed three songs to the soundtrack. His indie-CD Unsaid & Understood, won an Out Music Award.

During American Idol (2002) and the national tour, fans discovered Verraros is gay through his online journal he created while attending Columbia College. To date, Verraros is the only openly gay American Idol finalist. OUT Magazine named him one of 2002’s Most Intriguing People and later he came out nationally in the Advocate.

Verraros remains active in Chicago’s GLBT community where he has made several special appearances at local events, including QE2. Verraros has just returned from Los Angeles where he performed during LA Pride. In addition to his upcoming appearance on the ChicagoPride.com float, the former Idol will be a judge at the finals of Windy City Gay Idol at Circuit Nightclub on June 18, 2005.