Installation just months away for The Legacy Walk 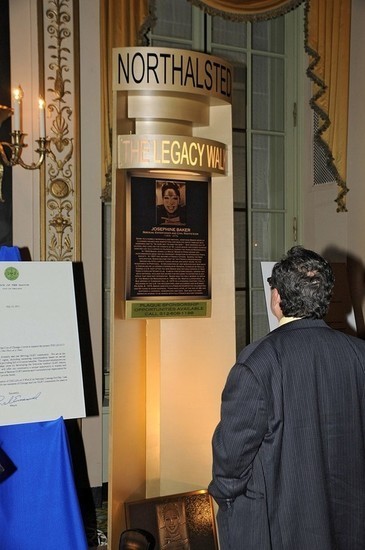 photo credit // frank failing
Chicago, IL - Less than two years after plans for it went public, The Legacy Walk is just months away from becoming a reality on Boystown's North Halsted Street.

Sponsored by The Legacy Project, by October the first of The Legacy Walk's plaques, commemorating and celebrating LGBT lives and achievements, are to be installed on the rainbow pylons that adorn the LGBT business and nightclub strip along North Halsted.

Salvo said manufacturing of the steel housing that will hold the plaques should begin soon, with plans to install a prototype plaque sometime in the next few months "to see if we have any fine tuning to do on that."

The goal is to have the first 17-20 plaques installed in time to dedicate The Legacy Walk on National Coming Out Day Oct. 11.

He said experts in LGBT history are working on the text for the first set of plaques.

"We have scholars from all over the world reviewing it," Salvo said. "It's actually very cool to be hooking up with all these folks."

Once those plaques are up, work will begin on 2013's set of inductees into the Walk, which will bring the total number of plaques on Halsted to 34. Each year after that, about half the plaques will be rotated out and replaced with a new class of inductees. Eventually, Salvo's goal is to open a space on Halsted to display plaques that aren't on the rainbow pylons and provide information about The Legacy Walk and LGBT history.

"It's going to be really unique," he said.

With the use of the pylons, the City of Chicago is co-sponsoring the Walk, which, in addition to educating people about LGBTs' historical significance and contributions, should become an internationally known tourist destination.

The Legacy Project, as a non-profit, is raising money to finance the Walk through fundraising events as well as sponsorships of individual plaques. Salvo said almost all of the initial set of plaques have sponsors at this point.

"We're actually very close to capacity on that," he said.

The organization is also getting ready for its Pride Month Party and Birthday Celebration June 30 at the Center on Halsted. The event, with tickets selling for $55, features performances by Angelique Munro, Cyon Flare, Madame X and Kayla Polanko, with DJ Felix spinning a mix of classic disco and house music.

"The Pride Celebration should be fun," Salvo said. "It's designed to be a party, not a lecture. We'll have the plaques there that have sponsors."

The "Birthday" part of the event, as well as the $55 price, stems from the fact that Salvo will also be celebrating his own birthday at the event.

The event is to be held on the Center's rooftop deck.

For more information on The Legacy Walk and The Legacy Project, go to legacyprojectchicago.org.