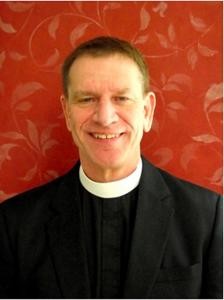 photo credit // http://search.nhepiscopal.org/
Concord, N.H. - The gay bishop of New Hampshire, Gene Robinson, is about to retire -- and Episcopalians there might replace him with another openly gay bishop.

Robinson was elected bishop in 2003, in a vote that caused a schism in the worldwide Episcopalian church. Conservatives from the United States and Africa threatened to leave.

But Robinson, who was first married to a woman and had two children, persisted. Five years after he was named bishop, he married his partner, Mark Andrew, in both civil and church ceremonies.

Now, with Robinson retiring at the end of 2012, the Diocese of New Hampshire (with just 4,000 members) is choosing between the Rev. Penelope Maud Bridges, Rev. A. Robert Hirschfeld, and Rev. William W. Rich, reported Boston.com. Rich is married to his gay partner.

Bridges, Hirschfeld and Rich will be meeting with congregants in New Hampshire this week.

You can read their applications here.