Randy Roberts Potts: "I wanted to die. I was conflicted day and night." 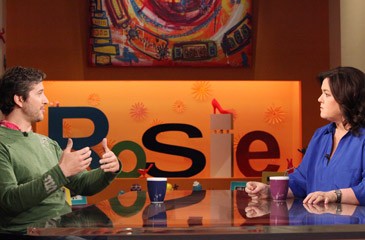 "I'd been suicidal for a few years," Potts told talk show host Rosie O'Donnell. "I wanted to die. I was conflicted day and night."

The oldest son of Roberta Potts and grandson to the late Oral Roberts, he grew up hidden behind the guarded iron gates of the family compound located on the campus of Oral Roberts University in Tulsa, Oklahoma.

Potts married at 20, had three children and at 30 he came out gay. The 38-year-old has been estranged from his family ever since. He appeared on The Rosie Show to share stories about living under the religious patriarch.

"I didn't use the word gay for myself until I was 27," Potts said. "And finally there was just this moment where … it's like it just came out … I'm gay, I said it out loud."

Initially Potts said he struggled with depression, but after the divorce he realized he had done the right thing.

"It was immediately confirmed that it was the right thing. And I was able to be myself," Potts told O'Donnell.

Potts and his wife divorced in 2006, the couple both live in Dallas and share custody of their three children.

Speaking out for Potts is personal. His uncle Ronnie committed suicide in 1982 after years of struggling with his own sexuality. In 2010, Potts recorded an ‘It Gets Better' video message using a letter to his deceased uncle.

Since sharing his story publicly, Potts has been estranged from his family and was denied a seat in the family section at his grandfather's funeral in 2009.

"My mother told me that it's disgusting that I'm openly gay," Potts told GoPride.com last year. "They have very strong feelings about me speaking out."

Potts lead a discussion and panel on faith and homosexuality last year in Chicago during an event hosted by Bishop Carlton Pearson's New Dimensions ministry.

"He's healing hearts," Pearson said of Potts, in what was a comparison to his grandfather's legacy as a faith healer.

Today Potts is a freelance writer and recently wrote about his coming out experience in the It Gets Better book. He shares his message of hope to gay youth and recently launched a new project called "The Gay Agenda."