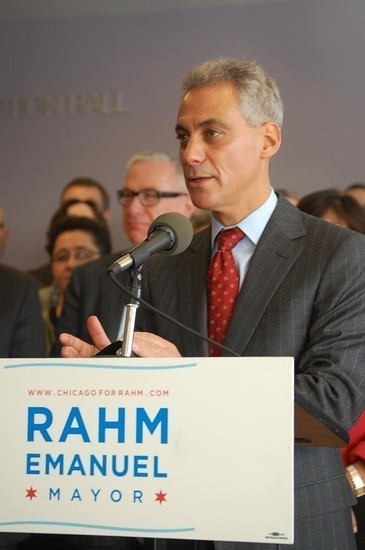 rahm emanuel at center on halsted in jan. 2011

"I'll push for it because it is consistent with the values base, and the practical values base, that I think it is right as a city, as a state and as a country," Emanuel told the Chicago Tribune.

"I support both the civil union and ultimately, gay marriage, because I think discrimination is embedded deeper than just recognizing a marriage or recognizing a civil union," Emanuel told WBBM-AM. "We need that recognizing the love between two adults also has a series of rippling effects through a series of policies, public and private, that we all take as a given, and is not true for gay and lesbian couples."

"The Mayor's comments demonstrate an understanding that while civil unions were an important milestone in the state, they do not offer all loving and committed couples the full access to the rights and responsibilities that marriage would," said Bernard Cherkasov, CEO of Equality Illinois.

In January Emanuel joined Mayors for Freedom to Marry, a bipartisan coalition of over 75 U.S. mayors in support of same-sex marriage.

Emanuel's support for the pending legislation follows a statement Tuesday by Gov. Pat Quinn indicating that he wants time to study issues surrounding same-sex marriage before committing. Quinn's staff confirmed to ChicagoPride.com Wednesday that the Governor is "looking to the Legislature to see what happens next."

"The Governor has stated in the past that he was supportive of civil unions and has dodged the question of marriage repeatedly," said Anthony Martinez, Executive Director of The Civil Rights Agenda.

Martinez told ChicagoPride.com that his is "pretty confident" the Governor will show support after he studies the bill.

"As the Governor continues to consider the needs of gay and lesbian couples in loving, committed relationships, I hope that he will become a champion of their full marriage equality," said Cherkasov.

Advocates say the November elections will be crucial for allies to LGBT community.

If passed, the bill would make Illinois the eighth state to legalized gay marriage. Same-sex marriage is legal in Connecticut, Iowa, Massachusetts, New Hampshire, New York, Vermont, Washington state as well as the District of Columbia.