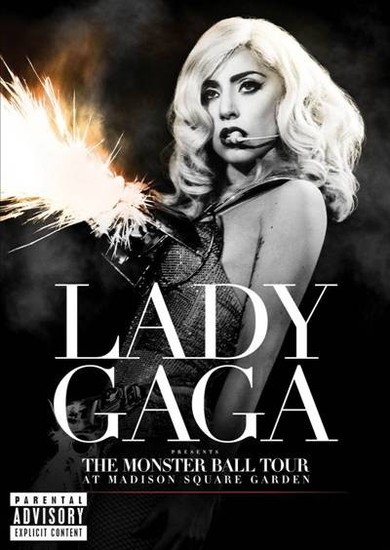 New York, NY - Multi-platinum and Grammy Award-winning artist Lady Gaga will release a Blu-Ray & DVD copy of the critically acclaimed, Emmy Award winning HBO special Lady Gaga Presents The Monster Ball Tour at Madison Square Garden that includes exclusive, never before seen footage. Also being released is the album Born This Way The Remix – a 14 track collection of remixes by some of today's most prominent artists, DJs and producers, including Foster the People, Michael Woods and The Weeknd.

The Blu-Ray and DVD will also available in a special package called "Born This Way, The Collection," which will include the multi-platinum 17-track record "Born This Way," the brand new "Born This Way" The Remix album and the Monster Ball Tour DVD. All items are available beginning November 21st, the same day that the much anticipated Lady Gaga x Terry Richardson book will be released.

In less than three years, Lady Gaga has earned numerous achievements including five Grammy Awards amongst twelve nominations, two Guinness World Records and the estimated sale of 23 million albums and 64 million singles worldwide. Billboard named her both the "2010 Artist of the Year" and the top selling artist of 2010 ranking her as the 73rd Artist of the 2000's decade. Gaga has been included in Time's annual "The 2010 Time 100" list of the most influential people in the world as well as Forbes' list of the "The World's Most Powerful Celebrities" in the world.

Lady Gaga was placed by Forbes at number seven on their annual list of the world's "100 Most Powerful Women." With over 1.9 billion combined views of all her videos online, Lady Gaga is one of the biggest living people on Facebook with over 44 million ‘likes' and is #1 on Twitter with over 14 million followers. Lady Gaga is the only artist in the digital era to top the 5 million sales mark with her first two hits.

Lady Gaga's third studio album, Born This Way, broke the iTunes record for the fastest rise to the # 1 on release day. The singles from the album, including "Born This Way," "Judas," "The Edge of Glory" and "You and I" have sold a combined total of more than 7 million copies in the US alone.

The first single from the album, the title track "Born This Way," set a music industry record by becoming the fastest single in history to reach sales of 1,000,000 copies (five days after its February 11th release). Only the 19th single to ever debut at #1 on the Billboard Hot 100 (issue date February 26, 2011), the recording was Lady Gaga's third #1 on the chart. On iTunes, the song debuted at the top spot in 14 countries, including the U.S., and hit #1 in all 23 iTunes stores worldwide its first week out. The singles from the album, including "Born This Way", "Judas", "The Edge of Glory" & "Yoü & I" have sold a combined total of more than 6 million copies in the US alone.