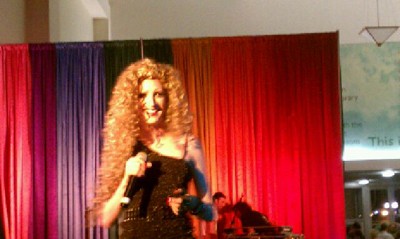 photo credit // jacob meister
Urbana, IL - The Champaign-Urbana gay pride festival drew hundreds of people Saturday, marking only the second time in the city's history for such an event.

CU Pride Fest for lesbian, gay, bisexual and transgender people and their friends ran from 4 p.m. to 2 a.m. at Lincoln Square Village in Urbana.

The theme of this year's event was "Pride Makes It Better." As organizers explained, Illinoisans have much to celebrate this year with the passage of the civil unions law, which took effect in June of this year.

"The event was well attended and a great time for families and the entire community," said Jacob Meister, President of The Civil Rights Agenda (TCRA), a group that was instrumental in lobbying the Illinois General Assembly to pass The Illinois Religious Freedom Protection and Civil Union Act.

"It's great to see such an active LGBT community in central Illinois," Meister told ChicagoPride.com. "If there is going to be progress in Illinois toward such things as full marriage equality, we need to change the hearts and minds of those in smaller communities. True progress requires that people across the state realize that the LGBTQ community not just an isolated group of people in Chicago."

According to the 2001 census, nearly 350,000 LGBT people live in Illinois, with Champaign among several counties with the highest populations in the state.

The event, held at 88 Broadway and Lincoln Square Village in Urbana, featured more than 55 booths with local artists, vendors and community organizations, including TCRA.

"It was great to see such a diverse crowd. We had hundreds of visitors at The Civil Rights Agenda's booth," said Meister. "What stuck me was the number of clergy, I talked with five of them who were interested in participating TCRA's Faith Project event in Champaign"

CU Pride Fest was coordinated by Champaign-Urbana residents in partnership with the Uniting Pride Center of Champaign County, an organization representing the interests of the lesbian, gay, bisexual, transgender, queer/questioning (LGBTQ) community and its allies in Champaign-Urbana.

Gay pride festivals have become regular events worldwide since 1970, when they were first held in the United States to commemorate the Stonewall Uprising in New York City.