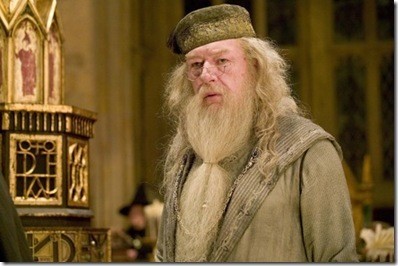 The controversy comes as the entire world goes Harry Potter crazy, with the last installment of the movies, "Harry Potter and the Deathly Hallows Part 2," hitting screens this weekend.

The books never explicitly say anything about Dumbledore's sexuality. Dumbledore does express love and affection for a male friend during his young adulthood. Rowling talked about his sexuality after the books were all published, when she was specifically asked.

During a live internet feed of the show, Schroeder told a housemate: "He's in a school with little kids, you can't make that guy gay! It isn't right to have it in a little kids book, and have the headmaster locked away in this magical land [be] gay. That isn't the right kind of writing to do."

CBS quickly released a state to the Gay and Lesbian Alliance Against Defamation (GLAAD), pointing out that "Big Brother" is a reality show and is not censored.

"BIG BROTHER is a reality show about watching a group of people who have no privacy 24/7 — and seeing every moment of their lives. At times, the Houseguests make comments, reveal prejudices and other beliefs that we do not condone. Any views or opinions expressed in personal commentary by a Houseguest appearing on BIG BROTHER, either on any live feed from the House or the broadcast, are those of the individual(s) speaking and do not represent the views or opinions of CBS or the producers of the program," CBS said.

GLAAD was not impressed:

"Needless to say, this still doesn't address the main problem. This is by no means the first time Schroeder has delivered a homophobic tirade on Big Brother, however. Back in 2009 during the show's 11th season, Schroeder was caught on camera repeatedly calling housemates he was in fights with anti-gay slurs, including 'homos' and the f-word," the group said in a statement.