Wednesday to become a landmark for gay rights in Illinois 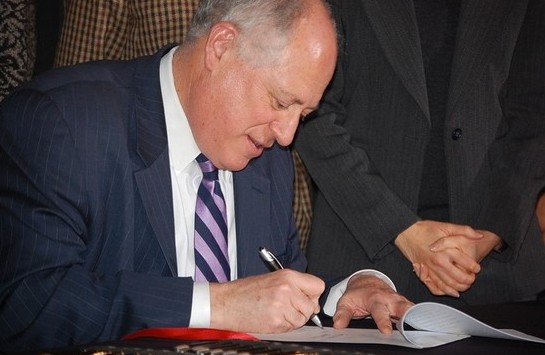 On Jan. 31, Gov. Pat Quinn signed into law the Illinois Religious Freedom Protection and Civil Unions Act, which was passed by Illinois lawmakers in December. The passage of the law was the culmination of years of work by openly gay State Rep. Greg Harris (D-Chicago), who first introduced the legislation in March 2007.

"All I hear about are couples who are so excited about planning their event, about sharing this with their family and friends," Harris told the GateHouse News Service. "It's a whole new world for Illinois, and I think it's a good thing."

It's unclear how many couples will apply for civil union licenses beginning Wednesday, though after holding more than 40 educational civil unions sessions around Illinois, Equality Illinois reports an "incredible outpouring of interest" throughout the state, not just Chicago.

"I'm thrilled this day has finally come," said Orr. "This will be a joyous day for all couples — gay and straight — who want to make history as part of the inaugural group of civil unions."

The Cook County Clerk's Vital Records office, located inside the Daley Center at 50 W. Washington St., will open at 7:30 a.m. The first couple in line will receive a gift package. All other couples in line by 7:30 a.m. will be eligible for a gift raffle.

The City of Chicago plans a celebration of civil unions on Thursday, June 2 when 30 same-sex couples gather in Millennium Park for a ceremony in their honor. Illinois Gov. Pat Quinn and Chicago Mayor Rahm Emanuel plan to attend.

The Civil Rights Agenda, one of the LGBT advocacy groups that lobbied support for the civil unions act, will hold a mass civil union ceremony on June 3. Unite with Pride: A Community Celebration will be held at the Chicago History Museum.

Civil unions insure a broad range of rights, including hospital visitation rights, right to inherit even if the deceased didn't leave a will, and right to access spousal health insurance benefits provided by employers.

Illinois is the sixth state to allow civil unions, which are not recognized by the federal government. Illinois law remains to limit marriage to one man and one woman.