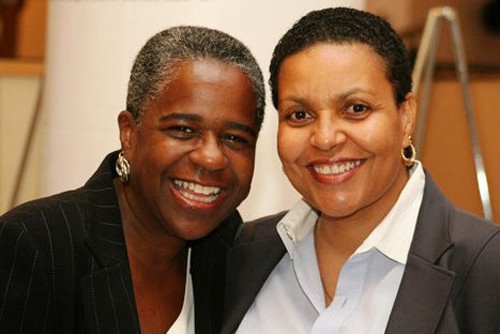 Every morning, before drinking coffee or sharing breakfast, and maybe getting a workout in at The Y, life-partners The Rev. Brenda and Lee enact their daily devotions: First, Brenda and Lee greet one another with good-morning wishes. Then, with prayer and spirit, they thank God for another day together, as they have every day for almost eight years.

It isn't said whether either expected to later embark on a same-gender loving relationship, that each now defines as a "whole lot of joy," when first meeting at a mutual friend's BBQ in 1991. However, as members of the Trinity United Church of Christ, they became friends in 2001, and an intimate connection soon started manifesting between them when they starting working together in a church ministry in 2003.

"I didn't realize we were dating [at first]," Lee says," we were hanging out, making out, and at some point, I was, like, I guess we are dating."

"We developed a deep bond," The Rev. Brenda follows, "…as I was getting ready to go to seminary … I have never felt so fully loved by someone and so authentic in that loving … I felt in my spirit that Lee was my soul-mate." The Reverend revealed her soul in kind, when during a ministry conference, Brenda invited Lee to join her in the conference chapel and proposed.

"It took my breath away," Lee says of that moment. "I was so overwhelmed with love, joy and happiness—yes! I'll spend the rest of my life with you." The two exchanged vows that same moment.

Currently, the The Rev. Brenda and Lee are active in the AChurch4Me? MCC [sic] ministry, attending/taking part in Sunday worships, 11 a.m. at the National Pastime Theater, 4139 N. Broadway, Chicago. The two will also be one of 30 couples receiving a civil union at the City of Chicago-sponsored, mass-officiating ceremony at Millennium Park's Wrigley Square, June 2, 2011.

"It's important to see African American same-gender loving couples," Lee says of the June 2, ceremony. "To be part of this overwhelms me with excitement and emotion, and it's an honor to be included with the other 29 couples."

"It's an exciting time," The Rev. Brenda concludes. "Our love is no different. We love like everyone else does, and we are to be respected by each other and our society."