Kathy Griffin swears she won't tone it down 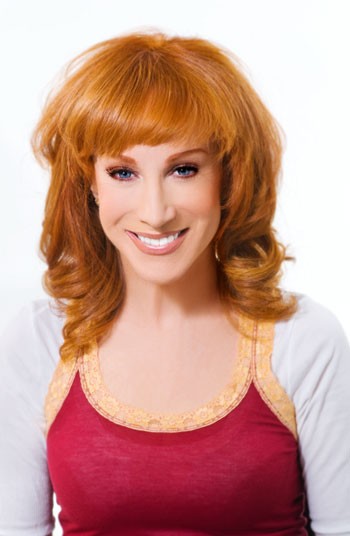 New York, NY - The often controversial, and unashamedly self-promoting Kathy Griffin is refusing to tone down her appearance on CNN's New Year's Eve show tonight, saying she is prepared to be pulled off air if necessary.

"If CNN dares to pull me live, I'll be walking right over to [ABC's] 'New Year's Rockin' Eve' to give Dick Clark a lap dance. It's up to you America," joked Griffin.

The 50-year-old is scheduled to return as co-host tonight with Anderson Cooper in what she is calling "yank watch 2011." Griffin says she can't be tamed by the TV network's long list of rules and regulations, including a list of off-limit words.

"There's no regret (about last year's show) I only want to go further," Griffin told the Hollywood Reporter. "This year in my contract, in addition to the stipulation that I have to give my money back if I swear, they also say they are just going to literally pull me (off air)."

In 2008 Griffin let the "f word" slip and then was forced to return her paycheck last year after again swearing on air during CNN's New Year's Eve special.

Griffin is an outspoken supporter for LGBT rights, including same-sex marriage. She has protested against Prop 8 and volunteered for the LA Gay and Lesbian Center's "Vote for Equality" campaign. She also has been a long-time supporter of the Aid For AIDS annual fundraiser, Best In Drag Show in Los Angeles, and hosted the opening of the show for more than five years.

CNN's New Year's Eve special with Griffin and Cooper airs from 11 to 12:30am ET.