Brittney Griner pleads for Biden to help secure her release 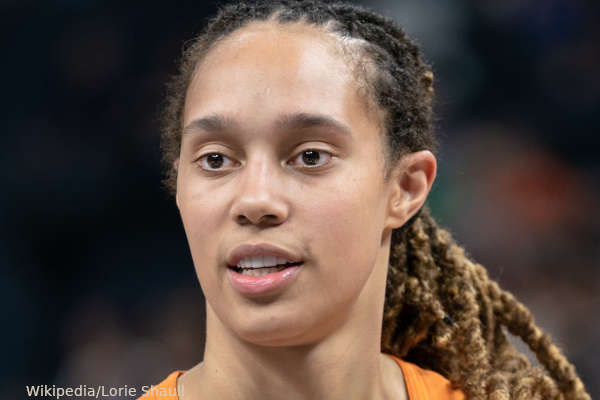 In a letter addressed to President Joe Biden, WNBA star Brittney Griner told the president that she fears she might never return home.

According to the AP, Biden received the letter on Monday.

Griner, a two-time Olympic gold medalist, was arrested by Russian authorities in February on charges of possessing cannabis oil as she was making her way to play for her Russian team.

"As I sit here in a Russian prison, alone with my thoughts and without the protection of my wife, family, friends, Olympic jersey, or any accomplishments, I'm terrified I might be here forever," Griner wrote.

"On the 4th of July, our family normally honors the service of those who fought for our freedom, including my father who is a Vietnam War veteran. It hurts thinking about how I usually celebrate this day because freedom means something completely different to me this year."

"Please do all you can to bring us home," she continued, referring to other Americans detained abroad. "I voted for the first time in 2020 and I voted for you. I believe in you. I still have so much good to do with my freedom that you can help restore. I miss my wife! I miss my family! I miss my teammates! It kills me to know they are suffering so much right now. I am grateful for whatever you can do at this moment to get me home."

During an appearance on CBS Mornings, Griner's wife, Cherelle, said that she would no longer be silent about her wife's detention.

"I will not be quiet anymore," she said. "My wife is struggling and we have to help her."

Biden and Vice President Kamala Harris spoke with Cherelle Griner on Wednesday. The president said that his administration was committed to pursuing every avenue to bring Griner home.

In May, the State Department designated Griner as wrongfully detained. The designation means her case is being handled by the government's chief hostage negotiator, the AP reported.

According to the AP, Griner on Thursday pleaded guilty to bringing hashish oil into Russia, but told the judge that "there was no intent." "I didn't want to break the law," she said.