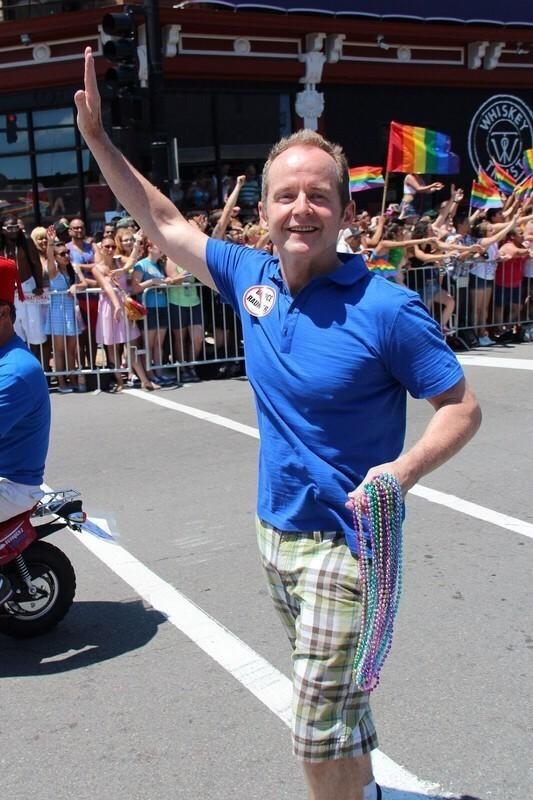 photo credit // gopride.com
As fallout continues over the shooting death of 13-year old Adam Toledo—police cam footage was released of his felling, causing protests across the country—there were unsubstantiated rumors of the impending resignations of Chicago's police superintendent and mayor.

She has dug in and insists she will continue to lead the city.

If Lightfoot did step down, she would pass the torch temporarily to another history-making person.

As the current vice mayor of Chicago since 2019, the job of interim mayor would be passed on to the 44th ward alderman, Tom Tunney.

The North Side businessman and owner of the Ann Sather chain of diners would become the second openly gay person to take the office—after Lightfoot; he would be the first openly gay man to do so.

According to rules, whether a snap election to fill the unexpired term is needed depends on when the resignation happens. But with only 23 months until the end of the term, Tunney would be allowed to finish through the February 28, 2023 election and April 4, 2023 termination.

In a metropolis with incumbency as the historically main strength for winning city elections, a hypothetical Mayor Tunney would have the advantage when running for a full term in his own right.

Tunney is popular because of his LGBT status well-before civil unions and marriage equality. He had a history advocating for LGBT non-discrimination long before his stint as a city councilman.

Some also see him as a balancing force between the need for improving the neighborhoods in his ward and the negative consequences of gentrification.

But others feel, based on what they see and feel—and what is leftover in their wallets—he has everything to do with increasing the challenges of gentrifying Lake View and its Boystown and Wrigleyville enclaves.

While everyday Chicagoans feel Richard J. Daley-era ward boss politics had been finally eclipsed, Tunney is someone who has a firm grip on his district. Challengers have come and gone, and none have been able to muster enough strength and money to take him down.

His challengers have exhorted against the further gentrification of a district already considered high-end—with new condo and luxury apartment developments in the ward still underway. The prices of rent, restaurants, and entertainment, are the main indicators for the average Chicagoan.

“I've been priced out,” is a common refrain for a lot of locals.

In fact, a Cornelia Avenue studio apartment near the lake that started out at $400 per month in 2005 is now $1,200 per month today, GoPride.com learned from a former Boystown resident.

While he may have public-facing fights with the Chicago Cubs organization and its family owners, some have argued that he has given too much already to a company worth over $4 billion.

Tunney has often been heard touting his advocacy of affordability, but as chairman of the powerful Zoning, Landmarks and Building Standards Committee, there are those who feel he has almost all the power in the city to prevent the damaging effects of gentrification and has failed.

The most famous instance in recent memory of a replacement mayor was upon the death of the first Black mayor of Chicago, Harold Washington, in 1987.

Sawyer became the second Black mayor of Chicago that December.