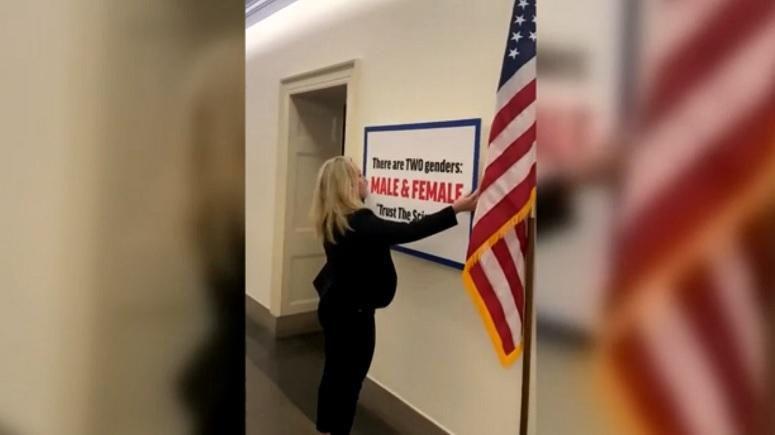 Illinois Rep. Marie Newman: 'I’m voting to pass the Equality Act for my daughter, the strongest, bravest person I know.'

Washington, DC - The U.S. House passed the Equality Act on Thursday in a 224-206 vote; only three Republicans joined Democrats. The fight moves to the Senate where it must pass a 60-vote majority to become law, under current rules.

The Equality Act would be the most far-reaching civil rights bill for LGBT Americans—providing them cover from discrimination in almost all aspects of life: banking and credit, education, employment, housing, public accommodations, retail, sales of goods and services, transportation like Lyft and Uber, among other things.

Introduced by Rep. David Cicilline (D-RI), one of nine LGBT House members, the law would amend the landmark Civil Rights Act of 1964 that afforded civil rights based on race.

“The LGBT community has waited long enough,” Cicilline said. “The time has come to extend the blessings of liberty and equality to all Americans, regardless of who they are or who they love.”

Rep. Raja Krishnamoorthi (D-Ill.) is vice chairman of the congressional LGBT Equality Caucus and co-sponsor of the bill. He explained the need for this federal law covering LGBT persons, “More than 50% of states lack legal protections based on sexuality or gender identity.”

Rep. Marie Newman (D-Ill.) took to the House floor to share why the Equality Act is personal to her.

“Without the Equality Act, millions of Americans like my daughter can be denied housing, education, and more simply because they identify as transgender,” she said. “I'm voting to pass the Equality Act for my daughter, the strongest, bravest person I know.”

Rep. Brad Schneider (D-Ill.) was moved by Newman's personal stake and placed a transgender flag in front of his office while quoting civil rights hero Dr. Martin Luther King, Jr., “Hate cannot drive out hate. Only love can do that.”

Rep. Raja Krishnamoorthi (D-Ill.) is vice chairman of the congressional LGBT Equality Caucus. He explained the need for this federal law covering LGBT persons, “More than 50% of states lack legal protections based on sexuality or gender identity.”

While the House debated passage of the Equality Act, Rep. Marjorie Taylor Greene (R-Ga.) put out a large red, white, and blue sign in front of her congressional office—facing Newman's office where a transgender pride flag is displayed.

The sign read, “There are TWO genders: Male and Female. 'Trust the science!'”

Greene, a promoter of QAnon conspiracy theories, then tweeted, “Our neighbor wants to pass the so-called 'Equality' Act to destroy women's rights and religious freedoms. Thought we'd put up ours so she can look at it every time she opens her door.”

While he did not vote for the Equality Act, Rep. Adam Kinzinger (R-Ill.) came to the defense of fellow Illinoisan Newman.

“This is sad and I'm sorry this happened,” Kinzinger said. “Rep. Newman's daughter is transgender, and [Rep. Greene's] video and tweet represents the hate and fame driven politics of self-promotion at all evil costs. This garbage must end, in order to restore our GOP.”

Doubling down on her message against LGBT rights, Greene attempted to erode the Equality Act by trying to attach homophobic and transphobic amendments to it.

She put forward the Protect Women in Sports Amendment. If it had passed, it would have erased the Equality Act and replace it with the Protection of Women and Girls in Sports Act. It would ban biological males from participating in women's sports at all school levels—in effect shutting out transgender participation in athletics.

She put forward protections for churches in the Equality Act—allowing 501c3 non-profits from employing or even serving LGBT persons.

She put forward the Religious Freedom Preservation Amendment—allowing people to more easily sue the government for damages if they believe any enforcement of the Equality Act goes against their religious beliefs.

“I introduced these amendments to stop this Democrat attack on girls, churches, and believers,” Greene declared.

The United States Conference of Catholic Bishops, one of the most powerful religious authorities in the nation, called on the U.S. Senate to stop passage of the Equality Act in their chamber.

The association made up of all the American Catholic bishops and archbishops argue that the Equality Act would take away religious freedom by forcing them to go against their religious beliefs—employing and serving LGBT people in opposition to their teachings against their “lifestyle.”