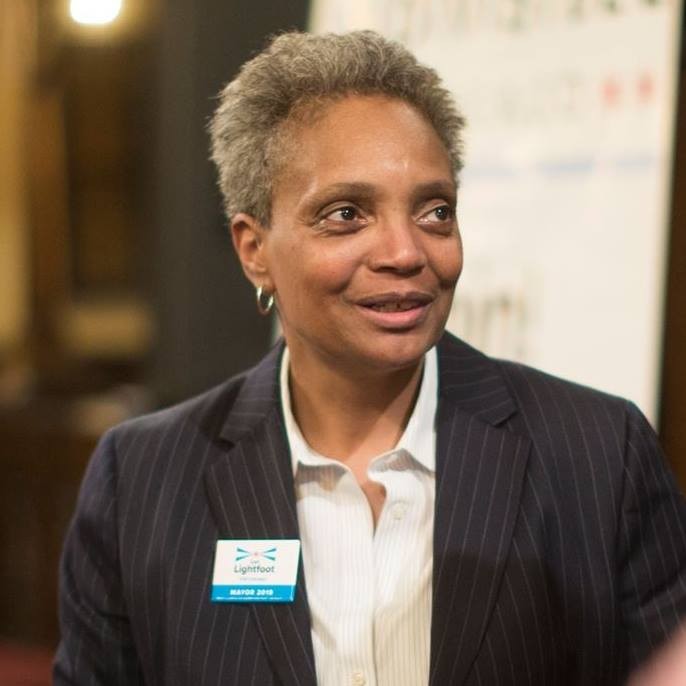 Underdog Lori Lightfoot, the first openly LGBTQ candidate for mayor, led the pack with over 90 percent of precincts reporting.

"This, my friends, is what change looks like," said Lightford in her election night speech. "Fourteen candidates was a lot, obviously, and voters had a lot of good options, but I want to thank the voters of this great city for fighting through the noise and coming to a place where we brought in the light."

She will face Cook County Board President and Democratic Party Chair Toni Preckwinkle in the April 2 runoff, ensuring that an African-American woman will become Chicago's next mayor.

GoPride spoke with Lightfoot supporters at her campaign party. "Honestly, I've been holding my breath," exclaimed Cherie Travis. "I've been telling people every vote counts. The difference between one and two and two and three can be 100 votes."

That sentiment was echoed by other passionate volunteers, some who had been there from the beginning. "The first thing I ever did, which was the most time-consuming, was just to get people to sign the petitions just to get her name on the ballot," Coleman Balogh, who had put in between 40 to 50 hours in the campaign, told GoPride.com. "This is our opportunity to change the status quo, to change the system, to make a difference."

In the 49th Ward, Maria Hadden, a black LGBTQ woman, has defeated Joe Moore, who had held the seat since 1991.

"I'm so proud of our community. So humbled that they chose me to serve. I'm excited about what this says about the direction that the residents in this city want to go," Hadden said in an emailed statement. "People voted for me because they wanted independent, progressive representation. I look forward to helping to redefine the role of Alderman."

Openly-gay Alderman Carlos Ramirez-Rosa has also held on to his seat in the 35th ward, beating out challenger Amanda Yu Dieterich.

Reflecting on the night as the election results rolled in Equality Illinois CEO Brian Johnson spoke to GoPride. "Part of me is still that 14-year-old queer kid coming to grips with my identity in suburban Virginia, wondering if I would have a future where I would be equal, loved and affirmed," he said. "This city and this State shows me every week that is true."