LGBT activists call on Huberman for action on CPS harrassment 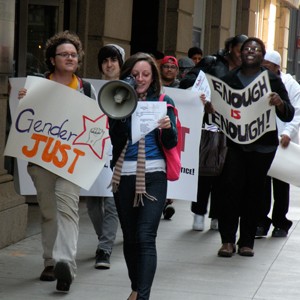 Gender JUST, a group that has met with CPS CEO Ron Huberman and other officials a number of times over the past year in an attempt to enact various policy changes aimed at protecting LGBT student, organized the protest.

While CPS policy prohibits discrimination based on sexual orientation, members of Gender JUST and other organizations are pushing for more protections, such as a formal grievance process for CPS students who feel that they have been discriminated against or harassed by school faculty and staff.

"We've been meeting with Huberman for a year, and even though there's been some commitments made, there has been absolutely no action," said Gender JUST co-founder Sam Finkelstein.

Finkelstein said that even though CPS officials have met with Gender JUST several times, members are frustrated that the meetings have not resulted in action. According to Finkelstein, CPS blames the current budget crisis for its lack of action. However, the activist fears that outside pressures from right wing groups like Illinois Family Institute might be coming into play and causing Gender JUST's meetings with Huberman and others to be cut short.

"We don't think they are taking us too seriously," Finkelstein added. "But especially in the context of these budget cuts, …it's even more important to address these issues."

Several current CPS students, as well as recent graduates, attended the rally, holding colorful signs that read, "Give students and voice!" and "Budget crisis? Human lives cost more." Many youth expressed their frustrations with CPS and stressed the importance of giving students an avenue to address the problem of faculty and staff members who discriminate against LGBT students. Some shared their own experiences, such as Brian, a recent graduate who said that when he stood up for himself in class after being ridiculed for being gay by a teacher, he was suspended, but the teacher was not punished.

"There was no repercussions on her part," he said. "It went on my report and she got off scot-free."

A 2007 graduate of Roosevelt High School, who identifies as a lesbian with a disability, also shared her experience with her peers. "They (faculty) discouraged me and pushed me away," she said. "I wish we had ways to speak up. We need to give students a voice when they face oppression in the school system."