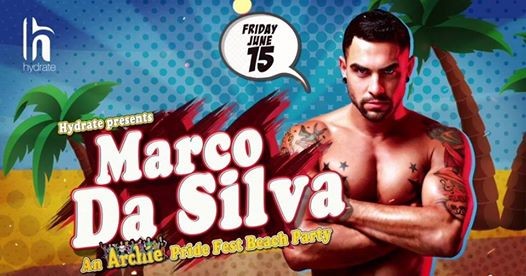 Hydrate Kicks Off Pride Fest Weekend with the one and only Marco Da Silva. Set begins at 11:30 p.m. Marco Da Silva is a successful dancer, choreographer and model with a huge passion for music. In 2008, after making an incredible name for himself as a commercial dancer and choreographer for several major celebrities such as Britney Spears, Kylie Minogue, Avril Lavigne, Mariah Carey and George Michael, Marco decided to turn his passion for house music into a new challenge and career. Being mentored by top DJ Peter Rauhofer, Marco bought professional DJ decks and worked hard to teach himself how to spin his records. He took the same sexy urban edge from his moves and created a personal sound he describes as “dirty beats”. In 2009, Marco officially launched his DJ career. Shortly thereafter, Marco was booked to play at MATINEE Circuit Party in Barcelona 2009 (the biggest gay Circuit Festival in the world with over 30,000 people in attendance) and was made a resident DJ by CIRCUIT after his successful set. In November 2009, Marco had his North American debut where he opened with a 5-hour set for Peter Rauhofer at Peter’s WORK Party during the 25th annual WHITE Party weekend in famous Miami Beach at the Cameo. 2010 was the year in which Marco showed the whole world he was a star DJ. From Roseland Ballroom for Gay Pride New York to the AmFar Gala Awards in New York and Los Angeles, he became the favorite DJ for high fashion designer D2squared events, and the list goes on: Nevermind in Sydney, 4 nights at CIRCUIT 2010 in Barcelona, worldwide known club “THE WEEK” in Rio de Janeiro, and many more top events. Marco was signed by Peter Rauhofer ‘s label “Star69” and released his first compilation called “M”, available on Beatport. His exclusive looks and personal touch in his work, a huge fan base, and a clear passion for life than can be felt in his beats have made Marco highly recognizable. Being praised as the new rising star DJ, it’s clear that Marco is already the new upcoming DJ in the scene: not being just someone else to deliver house music for the crowd, but also playing a big part of the show himself. Marco’s set begins at 11.30pm Late nite party til 4 am Lights by VJ George G
Event website