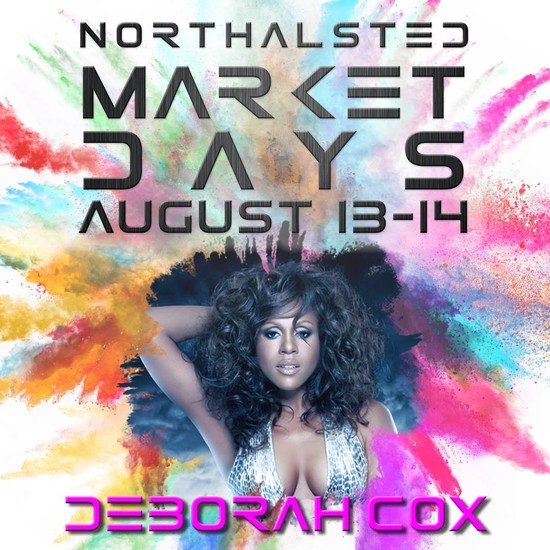 Deborah Cox is no stranger to Chicago’s gay scene. The Grammy-nominated singer-songwriter performed at Market Days in 2014, and also just finished a set at Milwaukee PrideFest 2016. And on Saturday, August 13, Cox will take the stage again in Chicago at Market Days 2016. The multi-platinum artist has conquered the R&B and pop charts, including six top-20 Billboard chart R&B singles, and an impressive eleven No. 1 hits on Billboard's Hot Dance Club Play chart. But it’s Cox’s smash hit “Nobody’s Supposed to Be Here” that rocketed her into superstardom in 1988. In addition to roles in both film and television over the past decade, Deborah released her fourth studio album in 2007 titled Destination Moon, a Grammy-nominated tribute album to the legendary Dinah Washington. That same year she received The Civil Rights Award from the New York Senate for her efforts in the fight for Human Rights and Equality. Cox’s fifth studio album, The Promise, dropped the following year in 2008. More recently in 2011, Deborah garnered her eleventh No. 1 Billboard Dance single with, “If It Wasn’t For Love,” and performed as the female lead in a revival of the musical Jekyll & Hyde in 2012. Cox’s most recent musical releases include the midtempo "Kinda Miss You" and the ballad "More Than I Knew,” both released in 2015. Deborah Cox performs the Belmont Stage at 8:45 p.m. on Saturday, August 13. The 35th annual Northalsted Market Days takes place on Aug. 13-14 from 11 a.m. to 10 p.m. The event, which is presented by the Northalsted Business Alliance, runs down Halsted Street from Belmont to Addison. A $10 suggested donation is requested at the entrance.