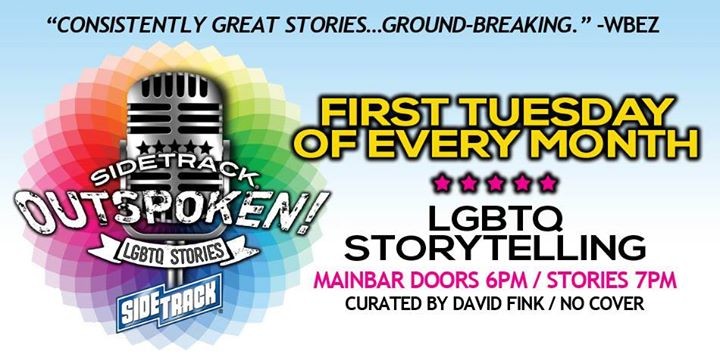 Don't miss the August edition of OUTspoken! at Sidetrack. True personal stories by LGBTQ storytellers. This special night will be extra festive as Sidetrack celebrates the Second Anniversary of OUTspoken! August storytellers include: M Shelly Conner, Art Johnston, Brad Lippitz, Erin Marshall, Ella Nelson and Hadeis Safi. Doors to MainBar open at 6pm. Stories from 7pm. No cover. OUTspoken! has met with rave reviews: "The room was abuzz after. People introduced themselves to the storytellers, hugged them, and thanked the emcees... It was truly great to be a part of it, even just as an audience member." -Parker Stockman Chicago Literati "Consistently great stories and it's ground-breaking." -WBEZ Afternoon Shift Grab a beverage from the bar and join us for a night of storytelling. Stay after OUTspoken! and enjoy TRL TUESDAY where VJ Bryan will spin everything you love from the 90's & early 00's.