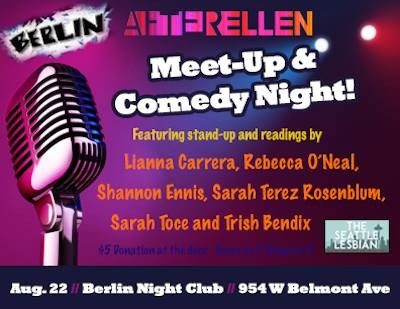 AfterEllen.com, the largest site for and about lesbian and bisexual women in media and entertainment, is coming to Chicago for the National Lesbian & Gay Journalists Association Convention & LGBT Media Summit! Join them for a few fun hours of cocktails, conversation and comedy. The doors open at 7 p.m. and the show begins at 8 p.m. at Berlin Nightclub. Featuring stories from queer writers Trish Bendix (AfterEllen), Sarah Terez Rosenblum (AfterEllen) and Sarah Toce (The Seattle Lesbian). PLUS stand-up from hilarious out performers Lianna Carrera, Rebecca V. O'Neal and Shannon Ennis. $5 gets you in and you can stay for the Bjork Dance Party after for free.