Gay officer back on active duty after formal discharge 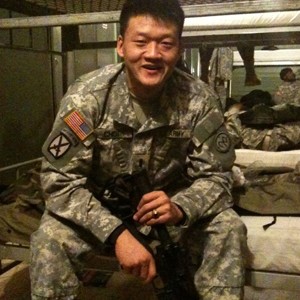 photo credit // jeff sheng - bilerico.com
Lt. Dan Choi, one of the most outspoken opponents of the military's ban on open gay service, has returned to active duty.

Last year, the Army fired Choi after the former Iraq veteran appeared on MSNBC's Rachel Maddow Show to promote Knights Out, the nascent West Point graduate group that lobbies for repeal of the policy. A formal discharge notification came on May 6.

"This is to inform you that sufficient basis exists to initiate action for withdrawal of federal recognition in the Army National Guard for moral or professional dereliction. … Specifically, you admitted publicly that you are a homosexual, which constitutes homosexual conduct. … Your actions negatively affected the good order and discipline of the New York Army National Guard," the notification states.

Choi appealed the decision. While the Army has yet to rule on the issue, Choi's return to active duty can be interpreted as a positive sign that the military would like to keep its high-profile Arabic linguist.

In recent months, the Pentagon has suggested it would consider altering implementation of the law, widely known as "don't ask, don't tell."

"We believe that we have a degree of latitude within the existing law to change our internal procedures in a manner that is more appropriate and fair to our men and women in uniform," Defense Secretary Robert Gates recently testified at a key Senate panel studying repeal.

Whether Gates' "fairer" policy includes allowing the public admission of being gay on national television, however, remains to be seen.