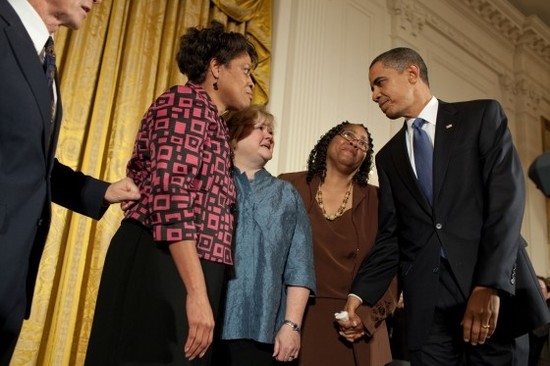 "After more than a decade of opposition and delay we passed inclusive hate crimes legislation to help protect our citizens from violence based on what they look like, who they love, how they pray or who they are," the President said as he signed the Hate Crimes Bill into law.

The new law, part of the fiscal year 2010 defense authorization bill, will extend federal hate crimes law to include crimes motivated by a victim's gender, sexual orientation, gender identity or disability. The bill also empowers the federal government to assist cities and States in investigating and prosecuting hate crimes.

A similar bill passed the House of Representatives in 2007, but was shot down by the Senate. This time around, the bill survived House and Senate scrutiny. Illinois Senators Roland Burris (D) and Richard Durbin (D), voted in favor of the bill when the bill cleared the Senate earlier this month.

"We applaud President Obama for leading the country on this crucial component of LGBT equality, and we are particularly proud of our Illinois congressional delegation for taking an early and strong position against hate crimes," said Jeremy Gottschalk, President of Equality Illinois' Board of Directors.

The new law was named in-part for Matthew Shepard, a 21-year-old student at the University of Wyoming who was brutally beaten and killed in 1998 because he was gay. Shepard's parents, Judy and Dennis Shepard, were instrumental in leading the fight for such legislation and both were present at Wednesday's signing.

"I promised Judy Shepard, when she saw me in the Oval Office, that this day would come, and I'm glad that she and her husband Dennis could join us for this event," the President said during the signing ceremony.

The law was also named for James Byrd Jr., a black Texas man dragged to his death in a racially motivated killing the same year. Louvon Harris and Betty Byrd Boatner, sisters of Byrd, were also in attendance.

International civil rights groups hailed the new law, noting that the law now puts the United States at the forefront of civil rights. "The adoption and enforcement of this bill sets the stage for further comprehensive reforms at home and adds momentum to U.S. efforts to continue its leadership in combating the scourge of hate crimes abroad," Paul LeGendre, director of Human Rights First's Fight Discrimination Program, said in a written statement.

"Hate crimes may attack an individual, but they are meant to threaten an entire group," Bernard Cherkasov, Chief Executive Officer of Equality Illinois, told ChicagoPride.com. "Now, at last, our government is sending a powerful signal that it will take hate crimes against lesbian, gay, bisexual, and transgender Americans very seriously."

Kevin Cathcart, Executive Director of Lambda Legal, said in a statement that the LGBT community's job is far from over. "Our work is not done. Now that the Hate Crimes Act has become law, Congress and the President must also enact an inclusive ENDA to protect us against discrimination on the job. The majority of Americans support workplace protections for lesbians, gay men, bisexuals and transgender people and there is no reason for further delay", he said, adding "There should be no place for discrimination in our laws."

"It is great news that it will be a federal crime to attack people because of their sexual orientation, gender status or disability. However, we need to remember that it is still against the law for LGBT people to serve openly as they defend our freedom, or to have legal protections for our relationships and families. There is still much work to be done in Washington and in our State Capitols," said State Rep. Greg Harris (D - 13 District).