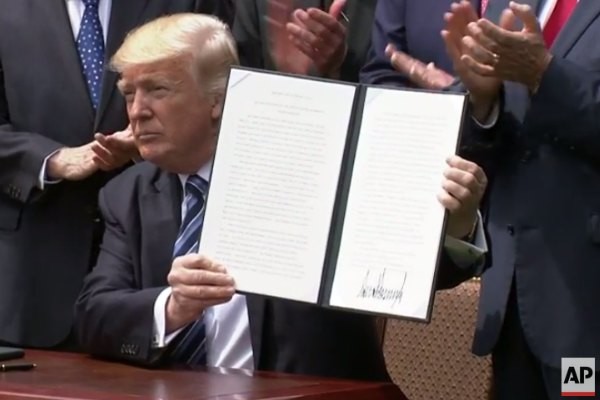 The order, signed on the National Day of Prayer, is titled Promoting Free Speech and Religious Liberty.

"We will not allow people of faith to be targeted, bullied or silenced anymore," Trump said during a signing ceremony in the White House Rose Garden. "And we will never, ever stand for religious discrimination. Never, ever."

"Under my administration, free speech does not end at the steps of a cathedral or a synagogue or any other house of worship. We are giving our churches their voices back and we are giving them back in the highest form."

The order directs the IRS to exercise "maximum enforcement discretion" in enforcing the Johnson Amendment, which limits tax-exempt groups from endorsing or actively opposing candidates for political office. The order also allows private employers who object on religious grounds to contraception to deny reproductive health care to their employees.

The order is not as broad as a leaked draft first reported by The Nation. That version reportedly sought to protect persons and organizations that oppose marriage equality and abortion rights and believe that a person's sex is determined at or before birth.

The American Civil Liberties Union (ACLU) said in a statement that it would challenge the president's order in court.

"The actions taken today are a broadside to our country's long-standing commitment to the separation of church and state," ACLU Executive Director Anthony D. Romero said. "Whether by executive order or through backroom deals, it's clear that the Trump administration and Congressional leadership are using religion as a wedge to further divide the country and permit discrimination. We intend to file suit today."

"America is a deeply religious country because religious freedom and tolerance of divergent religious views thrive. President Trump's efforts to promote religious freedom are thinly-veiled efforts to unleash his conservative religious base into the political arena while also using religion to discriminate. It's a dual dose of pandering to a base and denying reproductive care. We will see Trump in court, again," he adde