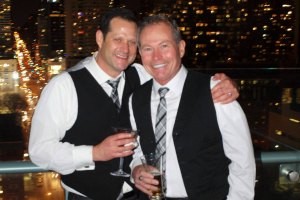 Grand Rapids, MI - A gay married couple has asked a federal judge to lift a stay in their case challenging Michigan's ban on gay marriage as one of the men fights a diagnosis of terminal brain cancer.

Bruce Morgan and Brian Merucci, who have been together seven years, married in New York in 2013.

After Kent County Clerk and Register of Deeds Mary Hollinrake refused to recognize their out-of-state marriage license, the couple sued Governor Rick Snyder and Hollinrake, who was later dropped from the suit following an agreement to be bound by the court's decision.

U.S. District Judge Gordon Quist set the case aside pending a Supreme Court decision in a similar case challenging the ban, according to alternative weekly MLive.com.

On Thursday, the couple asked Quist to lift the stay and immediately recognize their marriage.

"The impact of Bruce's cancer on his life and marriage to Brian appears to be lost on the State; the reality is the cancer is incurable and that Bruce will die," the couple's attorney, Stephanie Myott, wrote in the brief. "There is no time to wait to recognize their marriage, nor is time needed; the time is now."

Myott argues that the stay is no longer relevant since Snyder has decided against fighting a federal injunction ordering the state to recognize the marriages of 300 gay couples who tied the knot last year. The couples exchanged vows during the 1 day it was legal following a federal judge's ruling striking down the ban and an appeals court's decision to stay the ruling. The appeals court eventually overturned the ruling and plaintiffs appealed to the Supreme Court, which is expected to hand down a ruling in June.

"Brian and Bruce's rights to have Michigan recognize their marriage sprung to life upon the overturning of the Marriage Ban," Myott argued. "Bruce and Brian's marriage cannot now be unrecognized."

"Even if the Supreme Court ultimately allows the State of Michigan to deny marriage to same-sex couple, such a ruling would have no impact on the recognition of Bruce and Brian's 2013 New York marriage by the State."