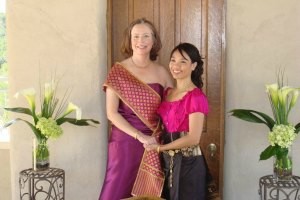 According to the Austin American-Statesman, Travis County Probate Judge Guy Herman recognized the marriage of a lesbian couple as part of an estate fight.

Sonemaly Phrasavath of Austin asked Herman to recognize her eight-year relationship to Stella Powell, who died of cancer in June without a valid will, as a common-law marriage.

In 2008, the women, who had been living together for a year, exchanged vows in a ceremony performed by a Zen priest. The marriage, however, is not recognized under Texas law.

Two of Powell's siblings are fighting Phrasavath over the estate.

"I can't imagine anyone being married for 6 or 7 years, then having to walk away after losing their spouse and feel like the marriage never happened."

Travis County Clerk Dana DeBeauvoir called Herman's ruling "a step in the right direction" but declined to say whether her office would begin issuing marriage licenses to gay couples.

A federal judge declared Texas' ban unconstitutional roughly a year ago. Officials appealed the decision to an appeals court, which heard oral arguments in January.