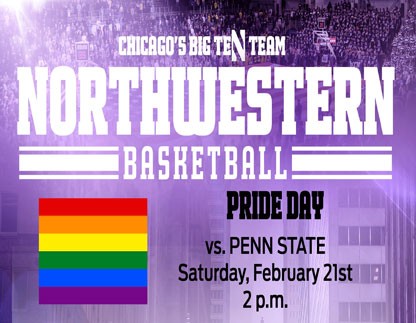 Chicago’s Big Ten team is calling on the LGBT community to cheer on the Wildcats as they face Penn State.

Evanston, IL - Northwestern University Athletics is calling on Chicago's LGBT community to cheer on the Wildcats as the men's basketball team hosts its first-ever "Pride Day."

Slated for Feb. 21 at 2 p.m., Northwestern will face off against Penn State at the university's Welsh-Ryan Arena, located at 2705 Ashland Avenue in Evanston. Tickets are $20 for those who register for the game.

And while it may be the athletic team's first Pride Day, catering to the LGBT community is nothing new for Northwestern. The nonprofit Campus Pride gave the university five out of five stars in a recent ranking of most gay and transgendered-friendly campuses.

The ranking is joined by groups like Northwestern University Gay and Lesbian Alumni (NUGALA), an organization one leader in Boystown says only bolsters the school's prominence in Chicago's gay community.

"I think that this is great that Northwestern sports is showing support to its gay fans," said John Dalton, a Northwestern alumni and owner of Boystown entertainment venues Minibar, D.S. Tequila, mEat and Dive Bar. "Great gay Northwestern organizations such as NUGALA have planned many events at Minibar in Boystown. So, there is a more active gay community than when I graduated from NU in '99. But, it is about time that the entire campus has rallied around its GLBT student population."

And those who plan to attend the Wildcat event can get perks for showing their support.

"Enjoy discounted tickets and celebrate equality as the Wildcats take on the Nittany Lions on Pride Day at Northwestern," Northwestern Athletics wrote in an announcement. "All purchasers through this code will receive a limited-edition Northwestern hat with a rainbow flag. Join us at Welsh-Ryan Arena for the best gameday experience in Chicago!"

Tickets for the Feb. 21 basketball event are reduced to $20 with the promo code "NUPRIDE" at NUSports.com.