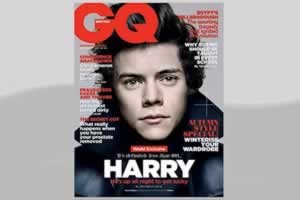 Singer-songwriter Harry Styles of the boy band One Direction has teased fans once more about his sexuality.

The 20-year-old Styles, who last year extinguished rumors that that he might be bisexual in an interview with GQ, earlier this month dismissed being female as an important trait for him in a potential partner.

"Not that important," Styles said during an on camera interview with On Demand Entertainment (ODE). He listed being natural and nice and having a sense of humor as important qualities.

This week, in an interview with the The Sun, the band teased Niall Horan about his penchant for picking up celebrities and joked that the next celebrity should be a man. When Horan scoffed, Styles quipped, "Hey don't knock it 'til you try it."

One Direction's fourth studio album, Four, arrived in the US on Monday.