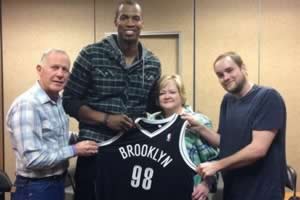 Proceeds from sales of Jason Collins jerseys will be donated to LGBT groups, including the Matthew Shepard Foundation and the Gay, Lesbian & Straight Education Network (GLSEN), the NBA announced Friday.

Collins last week became the NBA's first openly gay player when he signed a 10-day contract with the Brooklyn Nets. Since then, Collins' No. 98 jersey has become the NBAStore.com's most sought after item. The NBA said donations will total no less than $100,000.

Collins chose the number 98 in memory of Matthew Shepard, the University of Wyoming student who in 1998 was beaten to death by two men he met in a gay bar.

On Thursday, Collins met with Shepard's parents and presented them with an autographed No. 98 jersey.

"[Collins] is very kind, smart and humble. It was delightful" meeting him, Judy Shepard said.

Collins said that he is thrilled to work with organizations that "work tirelessly to ensure LGBT youth get the resources and assistance they need to be successful in life."