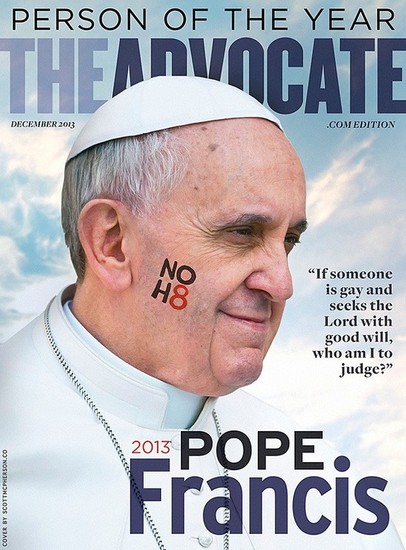 Chicago, IL - The Advocate, America's oldest gay rights magazine, on Monday announced it has selected the head of the Catholic Church as the 'single most influential person of 2013 on the lives of LGBT people,' a surprising move that has stirred controversy.

"In honoring the Pope with its 'Person of the Year,' The Advocate has chosen to follow our community's predilection for cheap celebrity rather than being a true advocate for our community," Andy Thayer, co-founder of Chicago-based Gay Liberation Network, told ChicagoPride.com.

In selecting Pope Francis, Advocate editors said the Holy Father has 'already caused reflection and consternation within his church' when it comes to lesbian, gay, bisexual and transgender (LGBT) rights.

When asked about gay priests in July, Francis said, "If a person is gay and seeks God and has goodwill, who am I to judge him?"

The Vatican has stressed the pope's words did not change Church teachings on homosexuality.

Critics of the magazine's selection argue Francis' shift on tone and emphasis around LGBT inclusivity has yet to be seen in the United States, where Catholic leaders continue to vehemently oppose same-sex marriage.

In Illinois, the LGBT rights community was successful in the fight to legalize same-sex marriage despite the Catholic Church's staunch opposition.

"This Pope has said things that should give people persecuted by the Catholic Church some hope that things will get better," longtime LGBT-rights advocate Kevin Boyer said. "But his Church stood side-by-side with designated hate groups in Illinois all summer and fall opposing equal marriage in Illinois."

Boyer is the co-founder of the GLAAD Chicago Leadership Council and recently served as a co-chair of the March on Springfield for Marriage Equality in Illinois.

As Illinois lawmakers considered marriage equality legislation, Cardinal Francis George, the leader of the Catholic Church in Chicago, was a vocal opponent of allowing gay couples to marry.

"The Pope was not speaking about approving gay marriage," George argued.

Bishop Thomas John Paprocki, leader of the Catholic Diocese of Springfield, said marriage between gays and lesbians is a union that "comes from the devil." The Bishop performed an exorcism as Illinois Gov. Pat Quinn signed marriage equality into law on Nov. 20.

"Despite promising signs, just 9 months into his papacy we don't know whether his impact will be significant, or even if his remarks might be largely political," Boyer added. "The Advocate should be embarrassed for choosing someone who has only started to throw us some crumbs."

Thayer agreed, "Rather than being a weather vane for popular culture, The Advocate should have bestowed its honor on one or more of the courageous LGBTs fighting for equality in Honduras, who face frequent death threats in a nation whose politically-motivated violence gives it the highest murder rate in the world. Honoring heroes like Pepe Palacios or Erick Martinez there would have helped given them an extra measure of protection that visibility can confer."

Pope Francis was named Time magazine's "person of the year" last week. He celebrated his 77th birthday on Tuesday.