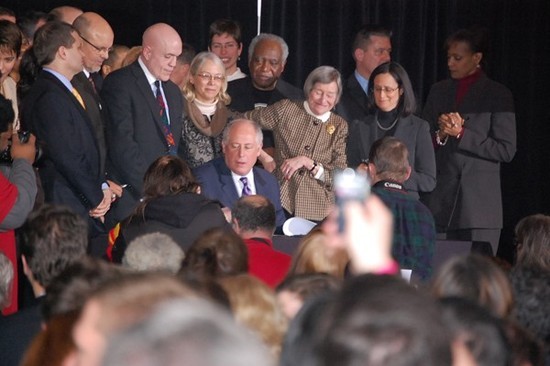 Chicago, IL - Illinois Gov. Pat Quinn (D) and Sen. Dick Durbin (D-Illinois) will open the March on Springfield for Marriage Equality on Tuesday, Oct. 22 with a welcome to the thousands of Illinoisans traveling to the State Capitol to call for passage of equal marriage in Illinois.

The governor, who signed civil union legislation into law on Jan. 31, 2011, has promised to sign marriage equality legislation if passed by lawmakers.

The Religious Freedom and Marriage Fairness Act (SB-10) cleared the Illinois Senate on Feb. 14, but despite strong support from local and national Democratic leaders, including President Barack Obama and Sen. Durbin, the measure stalled in the Democrat-controlled House on May 31.

After the House failed to vote on the measure in May, Windy City Times co-founder and publisher Tracy Baim reached out to 12 other individuals to become co-chairs and built support amongst LGBT and allied organizations to help organize the march on the first day of the fall veto session, which is Oct 22.

"We have built a great team working on this March," Baim told ChicagoPride.com last week. "This was truly a statewide effort to March on Springfield -- something that has never been done before for LGBT rights."

Topinka, a Republican, has remained a strong advocate for LGBT rights. She is a regular participant in the Chicago Pride Parade and has voiced support for two suburban Republican lawmakers, state Reps. Ed Sullivan of Mundelein and Ron Sandack of Downers Grove, who publicly backed the same-sex marriage legislation.

Earlier this week, organizers announced a roster of speakers, which represents the breadth and depth of the equal marriage coalition in Illinois, with Bishop Carlton Pearson, the founder and spiritual director of New Dimensions Chicago, scheduled to deliver the keynote address.

As organizers hope to secure final passage of the Religious Freedom and Marriage Fairness Act, gay rights advocates remain cautiously optimistic that the measure will be called during the fall veto session. The architect behind the bill, openly-gay State Rep. Greg Harris (D-Chicago), has been unwilling to commit to a vote, which could push a marriage vote to 2014.

The March on Springfield for Marriage Equality will get underway at Noon on Tuesday, Oct. 22 with a free one-hour concert. The 90-minute rally will begin with welcoming remarks by Gov. Quinn at 1 pm. A march around the Capitol will begin at 2:30 pm. Up to 5,000 people are expected to attend from all over Illinois.