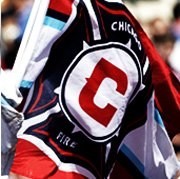 –will again benefit Equality Illinois and the organization's fight for the freedom to marry.

"Our partnership with the Chicago Fire is significant because it helps Equality Illinois deliver our message of fairness and equality to a diverse soccer fandom," said Bernard Cherkasov, CEO of Equality Illinois. "By continuing our partnership into a second year, the Fire demonstrates that embracing our organization and what we stand for is good for business and good for the sport. We thank the team for its ongoing involvement."

"We are pleased to continue our partnership with Equality Illinois for another season," said Dan Lobring, Senior Director of Communications with the Chicago Fire. "Our club is as diverse as the community that supports us, and we remain committed to bringing people together and creating a common passion for soccer."

A portion of all ticket sales for the LGBT Pride Night game at Toyota Park in Bridgeview will go directly to Equality Illinois and the fight for marriage equality in Illinois. The 7:30 pm game against the Montreal Impact will be preceded by a tailgate party and pre-match concert in The North End parking lot.

A corner kick ticket in a reserved section, regularly priced at $28, is available for only $20. Coach bus transportation to and from the Lakeview and Lincoln Park neighborhoods and the game ticket are paired together for only $32. Tickets can be purchased at www.chicago-fire.com/pride.

The engagement of the Fire with the LGBT community in 2012 was so positive that after riding on the Equality Illinois float in the 2012 Chicago Pride Parade, the team wanted a stronger presence and partnered with PepsiCo, Inc., and Section 8 Chicago–the Independent Supporters' Association to participate in the 43rd Annual Chicago Pride Parade this year. Representatives of the team were also present at Equality Illinois First Friday cocktail parties at Sidetrack bar in Chicago last year and this year to promote the LGBT Pride Night games and talk with Equality Illinois supporters.