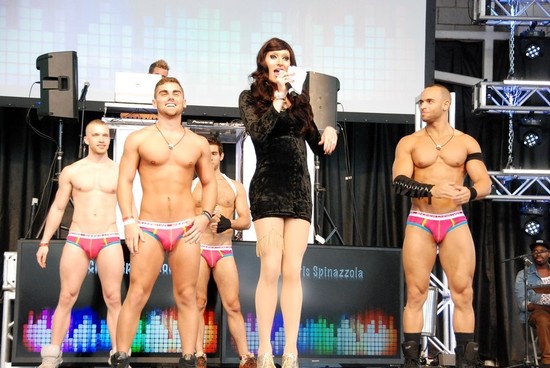 PrideFest officials said 28,340 patrons came through the Summerfest gates June 7–9, about 277 more people than in 2012, which saw record revenue for the event.

A strong opening-night audience for gay performer Andy Bell, who drew 8 percent more people than last year's opening performer Belinda Carlisle, helped set the pace for a busy day on Saturday, which was headlined by the Indigo Girls.

Sunday, which threatened rain, was a quieter day.

In addition to increased attendance, the event attracted more sponsorships from more companies than ever before, according to PrideFest president Scott Gunkel. In a press release, Gunkel thanked new sponsorship committee members Denise Haussy and Tangia Stegall for their assistance. He also thanked Francisco Araiza, who sponsored the multi-cultural stage, Todd Slusar for bringing in increased support from the Greater Milwaukee Foundation, J.R. Witt, for bringing in Baird and GaE as first-time sponsors, Dan Italiano for bringing in Red Bull, and Jerry Johnson for securing support for the History Project.

A new vendor for the dance pavilion, brought it in by Tony Bilot, gave PrideFest "a huge discount" on enhanced sound and lighting effects, Gunkel said.

This year's PrideFest was larger and more varied than ever, featuring new venues and programs. The Riviera Maya Stage highlighted multicultural music, and the Milwaukee LGBT Community Center created a sort of mini version of itself in a two-story structure on the south end of the festival grounds near the Harley-Davidson Roadhouse Stage. The mini center featured performers, family-friendly activities and a giant inflatable slide.

Proud Theater, a Wisconsin LGBTQIA youth theater organization, brought its three troupes from Madison, Wausau and Milwaukee to PrideFest to perform together for the first time at the center's site. The event also marked Proud Theater Milwaukee's first public appearance since its initial soft launch in April.

"The Center received wonderful feedback about being much more visible and offering expanded programming to reflect the diversity of our community," said board member Denise Cawley. "We welcomed more than 50 new members and had more than 150 volunteers working over the course of the weekend."

PrideFest attendees were given the option of adding a $1 donation to the center on their ticket prices as well as donations at the gate. The center raised $839 through the program.

There was a minor disturbance during the Saturday hip-hop performance at the multi-cultural stage, where a fight broke out but was quickly contained.

"Unfortunately, a few people had to ruin it for everyone else," Gunkel said, noting that such incidents had occurred in the past, and he remains committed to having a hip-hop stage at future events.